So much of what I do and who I work with is based on networking over a couple beverages, to some degree.  A good friend of the studio and fellow beverage lover Anna Harouvis, the creator of the fabulous “Anna In The Raw” juice line, hooked us up with world-renown chef and lover of all things culinary, Lanny Chin. After a few glasses of wine here in TJDS we got to talking about his love of pork. He said something simple yet profound that instantly sparked the idea for this shoot: “I love pork so much I could probably breakdown a hog blindfolded.”  Naturally, in my unfiltered style, I replied: “Bull$hit… No way you could do that!”  Boy, did he ever prove me wrong. The following paragraphs and images below are the result of that exchange… 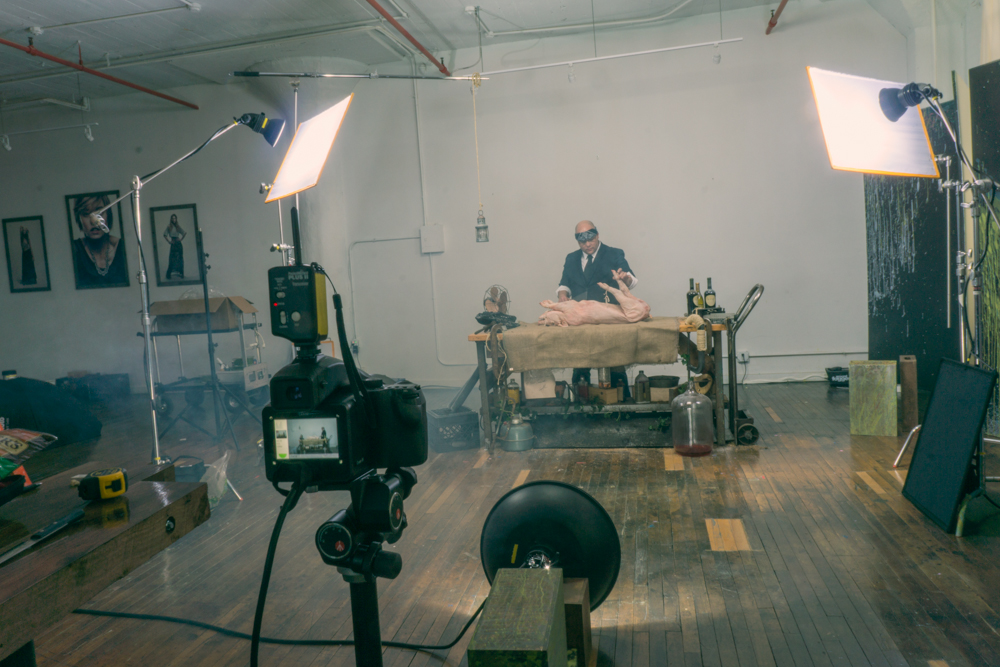 Above:  Lanny Chin stepping on set in front of the Leaf Credo 60 for the first time. Photo by Alex Gradisher

Lanny had worked with us briefly before, (throwing apples/kale/strawberries and other juiceable goodies at Anna’s head for her shoot a week or so before), so he felt comfortable working with me and trusted my many wacky ideas. I drew inspiration from a few other more interesting chef portraits that I had seen. We definitely wanted to avoid the typical dressed-in-a-white-chef’s-coat-holding-a-knife shot. Lanny needed to be set apart from the average chef and I wanted to create a portrait that would raise his profile here in the Cleveland area. After all, Lanny is anything but your average chef. 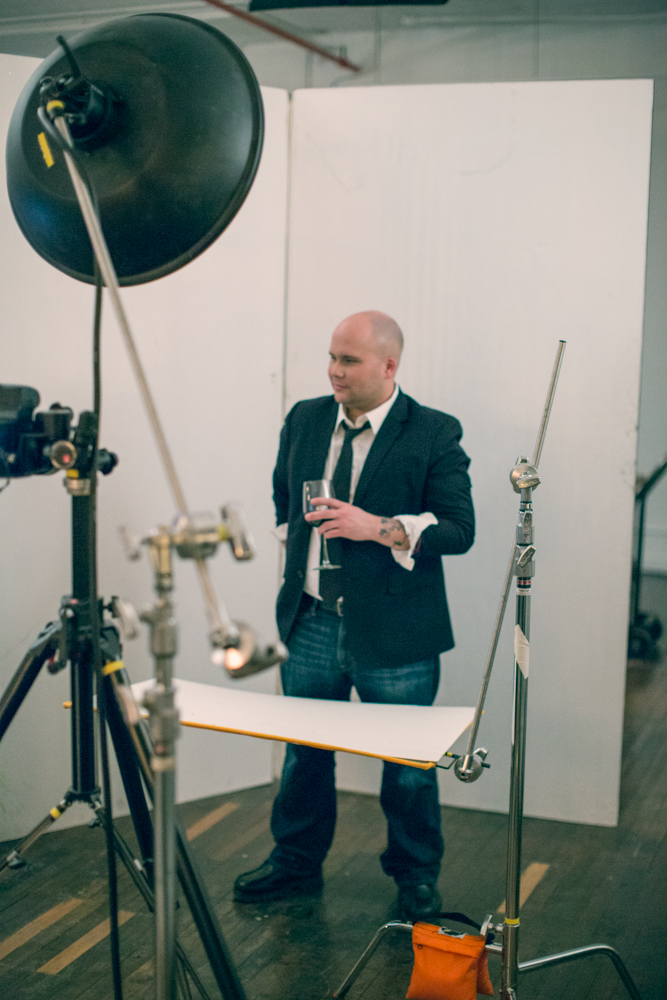 Classically trained at the International Culinary Arts and Sciences Institute, he took off down the age old path of a traditional culinary education followed by a grueling and eye-opening apprenticeship at a fine dining establishment where the only phrase you’re expected to utter is “Oui Chef.”  He landed as the Chef De Partie at the 3 Michelin star rated Alinea in Chicago, recently named the best restaurant in the world by Elite Traveler Magazine.  He would develop and perfect many of his skills there, but he also developed a bit of a rebellious attitude since the culture surrounding that particular restaurant wasn’t in line with Lanny’s more laid-back and fun-loving style.  With a blend of a traditional culinary arts background, and in my opinion, a far too humble demeanor, he came to Cleveland and has been pushing the envelope here ever since as the Executive Chef of Lago Restaurant and Wine Bar.

We started building up the set with a rusty old workbench, aged burlap, terracotta pots, milk crates and numerous other cool finds. We quickly realized we wanted a more cohesive feel for the art direction.  Alex Piotrowski, who has worked on numerous other projects with me, was more than thrilled since this gritty and somewhat dark style of shooting was right up his alley. With a plethora of props and odd tools in his collection, he arrived with a 100-year-old bonesaw, a pile of charred wood, and dozens of other props (including a pair of smoke machines) and we got to work. The slow buildup of material and dust was all part of setting the scene, and when added up, all that “junk” made for an amazingly detailed and layered set. 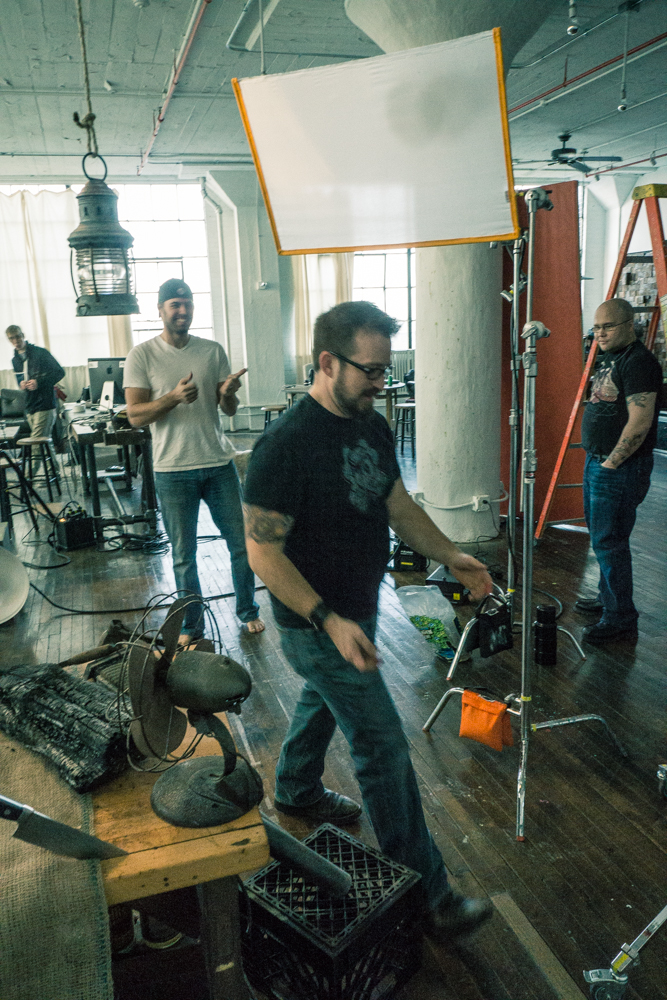 Above: Alex Piotrowski going back for more and more pieces of god knows what to help bring the set to life. Photo by Alex Gradisher

Ginnie Mae, our ever-present and always-lovable studio hound, served as a perfect stand-in for a quick light test. How considerate of her to allow me to give her a belly rub– something she’s so rarely known to receive.  Naturally my wife was none too happy to see this photo later that day… (DISCLAIMER: No fluffy beige puppies were harmed in the making of this BTS photograph.) 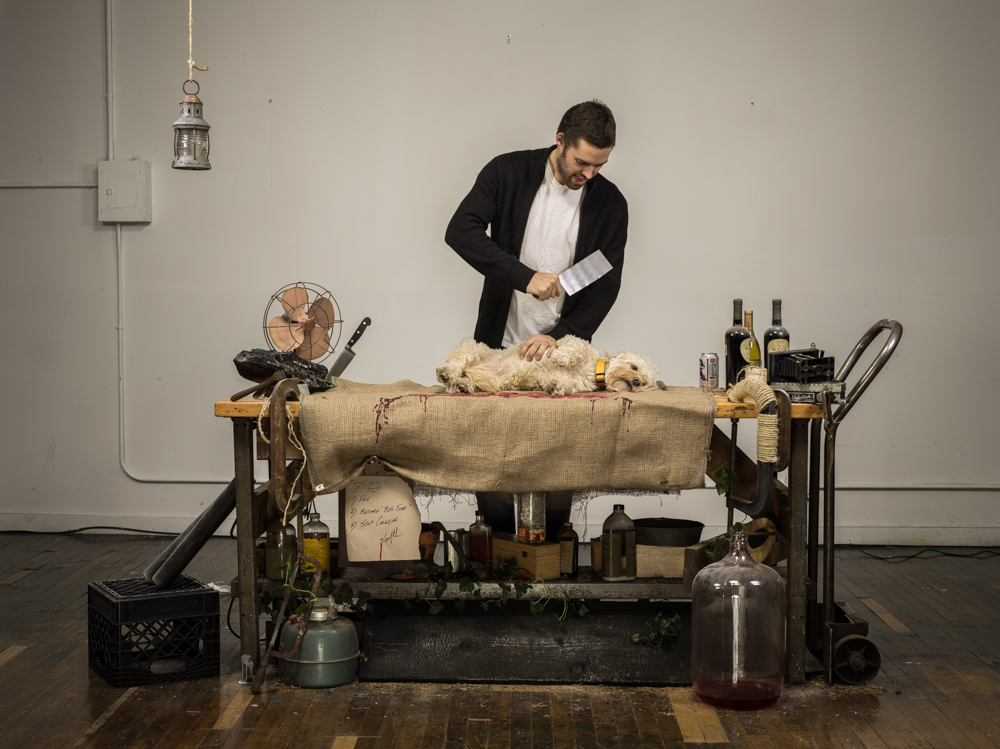 Above: Ginnie Mae having her moment to shine in the spotlight.

Lanny did indeed bring the pork — hooves and all. It was still a little frozen so we had to wait for it to thaw out a bit more. In the time it took to warm up we were able to add even more detail and layers to the set and tweak lighting until everything was exactly where we wanted it. 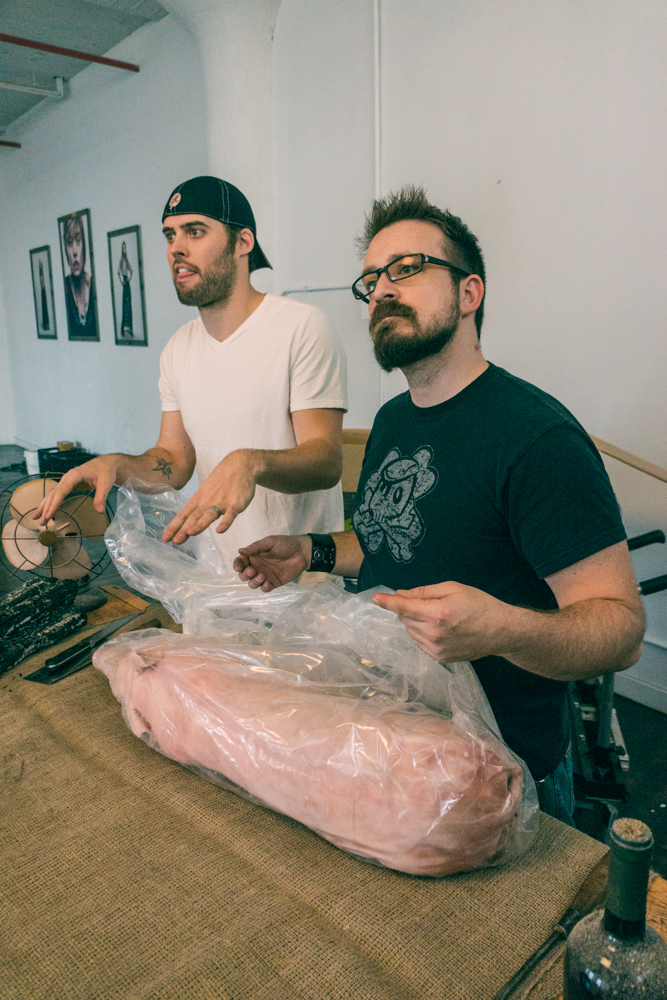 Above: Unpacking Wilbur with Alex Piotrowski. Photo by Alex Gradisher 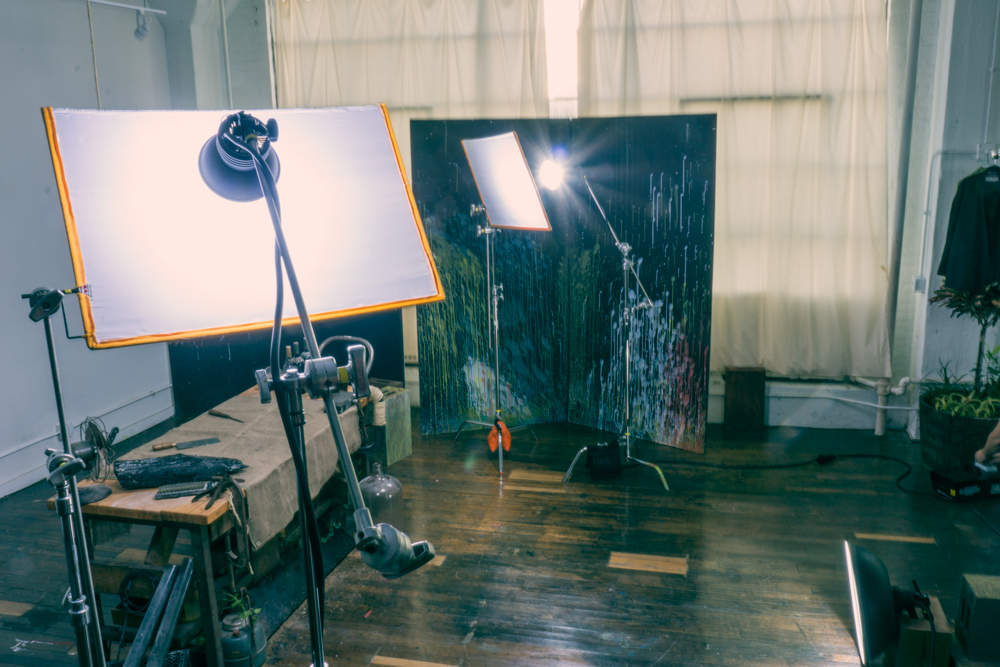 Above: Tweaking lights while ignoring how filthy our V-Flats still were from the Wicked Good Time shoot. Photo by Alex Gradisher 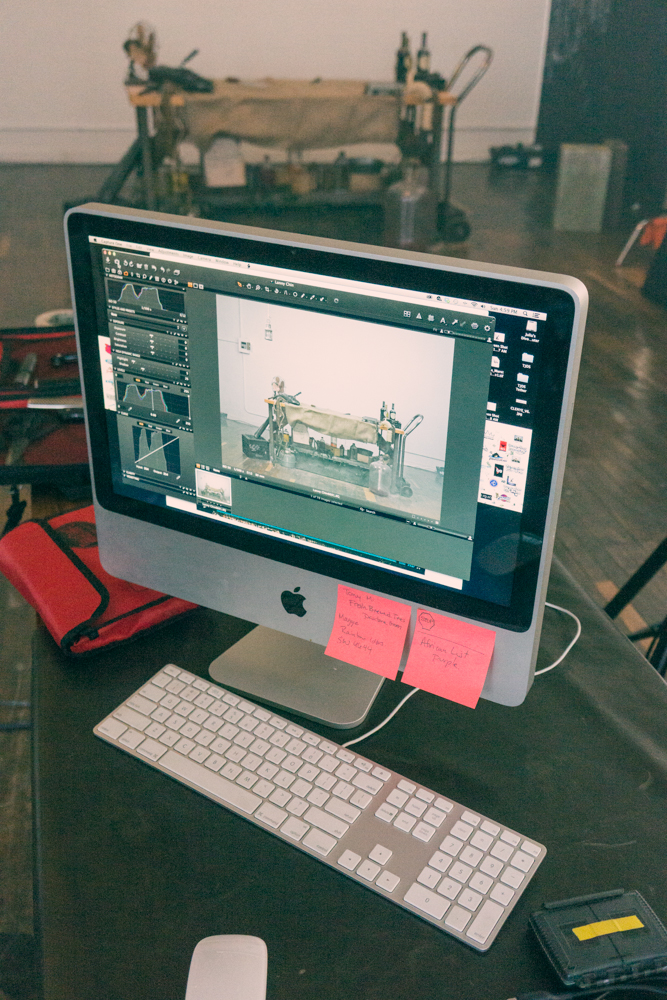 Above: Tethering the Leaf Credo 60 and checking our histogram in Lightroom. Photo by Alex Gradisher

The shoot itself didn’t take very long — we had a specific pose in mind and everything was pre-planned and pre-produced. Lanny only needed to be on set for 10 minutes or so but he was happy to hang out and just watch us do our thing… with a glass of wine in hand, naturally. Friend of the studio and the owner of Lago Restaurant and Wine Bar, Fabio Salerno was also hanging out in the studio that day. He hinted that he might want a similar style of portrait with his family done in the future (which I will neither confirm nor deny involves 50+ gallons of marinara sauce, a baby pool and lots of propane tanks).  So below is our RAW capture of Lanny before my two-time Photoshop Guru Award-winning post-production superstar Jason Feiler got his hands on it. 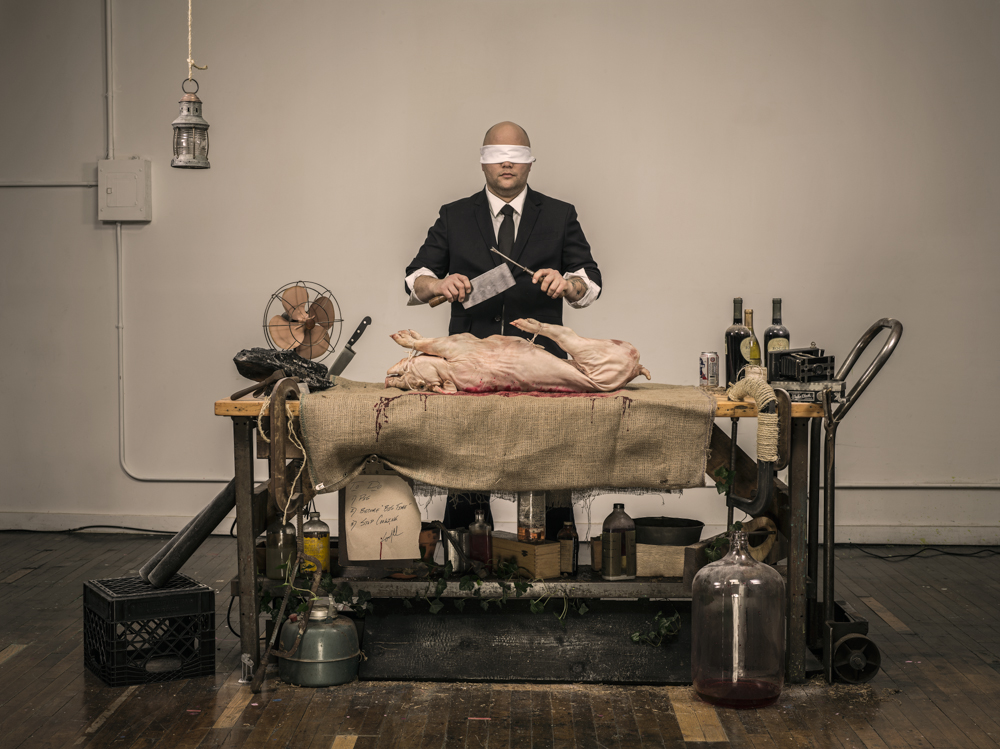 We had initially placed the set in one of our two normal shooting bays and were planning on using the white to composite a kitchen scene or simple restaurant wall.  But after looking through the RAW files we ultimately decided that the TJDS wood wall made for a better and more fitting backdrop, almost acting as a vertical butcher block.  Of course this was decided AFTER most everyone had left for the evening.   And knowing that we would have to composite the wall in after-the-fact, that responsibility was placed squarely on the shoulders of Jason.  But it was still my job to provide him with a ‘background plate’ that would match the initial scene.  So using the same Leaf Credo 60, lighting gear, and shooting from the same distance at the same height to maintain perspective was very important. 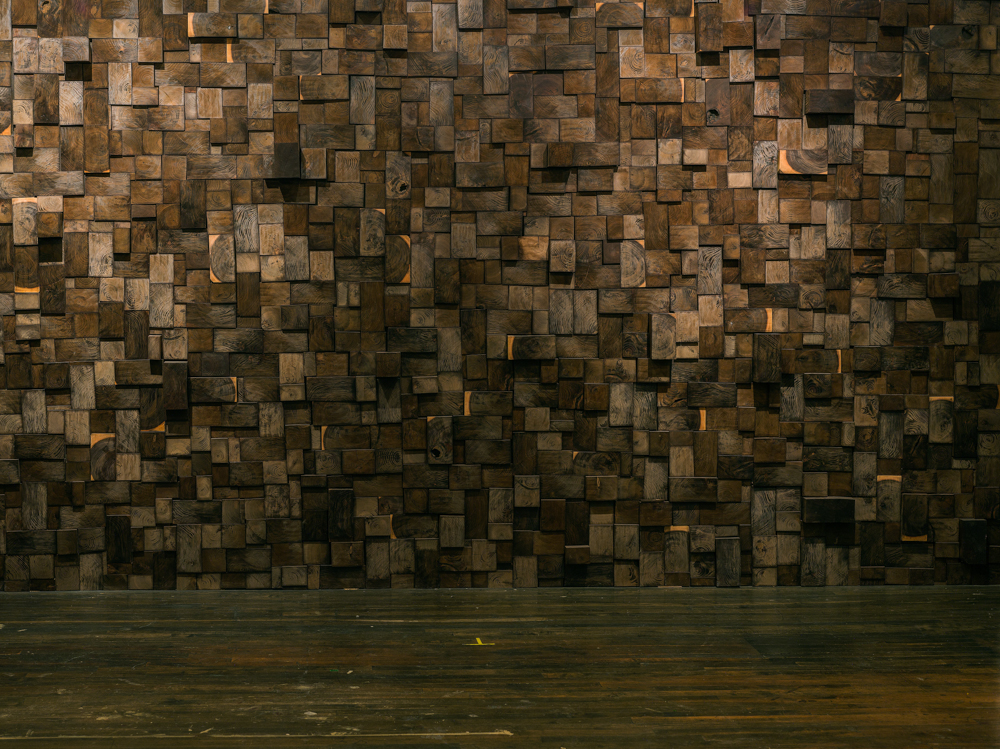 Building a photograph with layers and light and dust and smoke and metal and pork involves elements that are purposefully placed for a reason. It takes time. It takes patience — like building a cake, layer by layer. Unlike our previous shoot, where things were more spontaneous and a little less “polished” to say the least, this had more of a set purpose. Sometimes it’s easier to build something up yourself and have the control over the various elements. And having Lanny for our main subject was the apple in the pig’s mouth! (Pun most definitely intended). The final composite photograph below was the effort of far more people than just the few mentioned above.  And I could not have come anywhere close to this result without the support of everyone else involved. 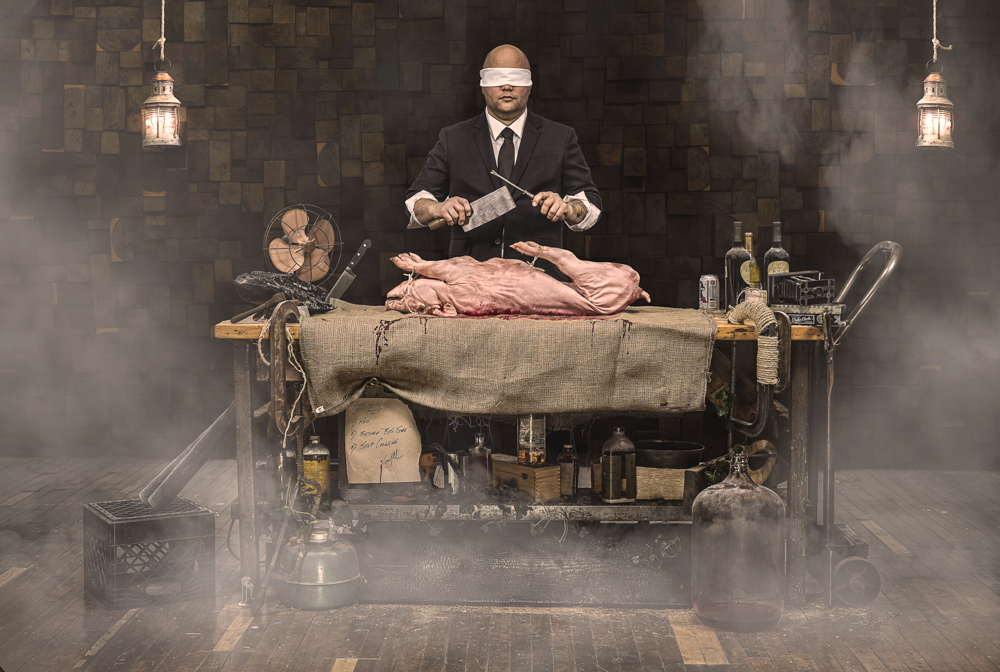 Here is our lighting diagram again lovingly created in excruciating detail by my right hand man Alex Gradisher, if you can make sense of it… all the more power to you, because I was there and this barely makes any sense to me. 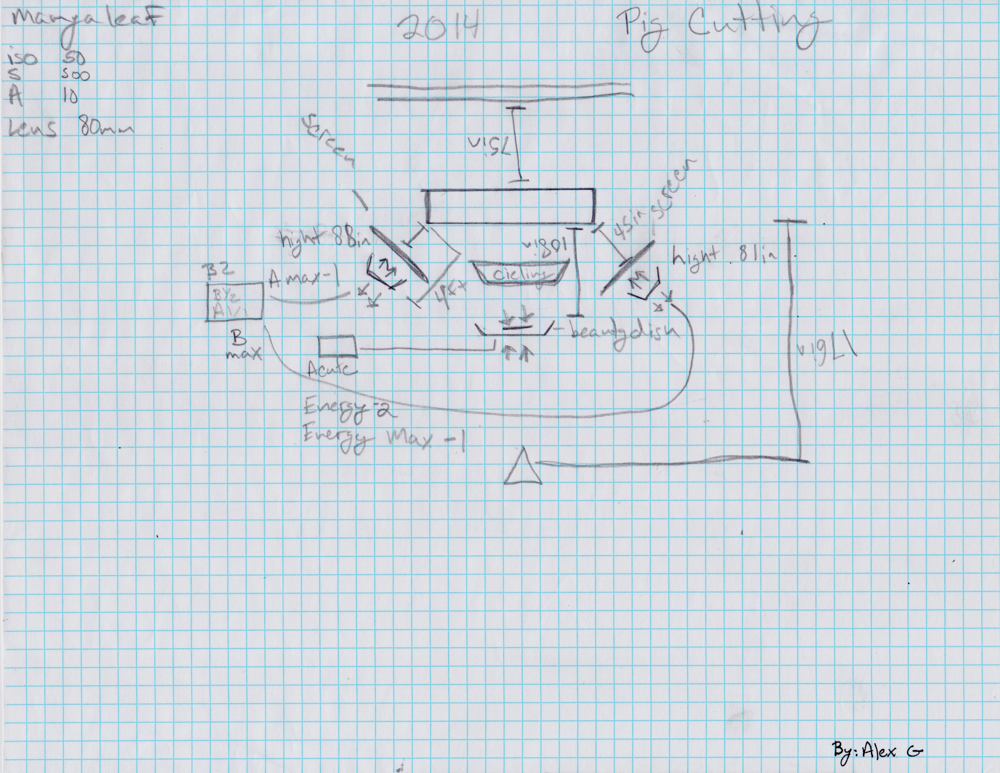