First off, It should be known that I’m not a Cleveland native. I moved here just 2 short years ago and as the new kid on the block I have had the opportunity to experience this city with a fresh perspective. It doesn’t take long to recognize that Cleveland is in ascension. This is no ordinary comeback.  Having the UFC Heavyweight Champion of the world in residence as well as Iron chefs and James Beard Award winning restaurants does not happen by accident. Having the most electrifying sports figure of this decade in LeBron James bring Cleveland it’s FIRST CHAMPIONSHIP IN 52 YEARS seems incredibly surreal. Look around. Housing prices are steeply on the rise. Vacant downtown apartments are non-existent. Restaurants are packed. The local creative community is attracting talent from all over the country to be inspired by a city that is breathing inspiration. Cleveland no longer needs to hope things will turn around; it’s happening now, and if you think otherwise, you’re wrong.

Soon after I moved here, I met with as many local photographers as I could (or at least as many as would take my calls). I studied their current and past work, searching for a way I could stand out among these other extremely talented creatives. While I admired the local creative and artistic photography, it didn’t take long to notice that much of the commercial and editorial work was bright, happy-go-lucky—and safe. The majority of what I saw was shot on solid white or very well blurred backgrounds. (Think about a 200mm lens at f/2.8.) Almost everything felt overly stock and forced. Nothing seemed indicative of the cultural renaissance this town is clearly in the midst of.

I wanted to take a BIG chance and move in a different direction than the majority of what I saw coming out of the photography industry here in Cleveland, so I began The “Dark Portrait” Series. 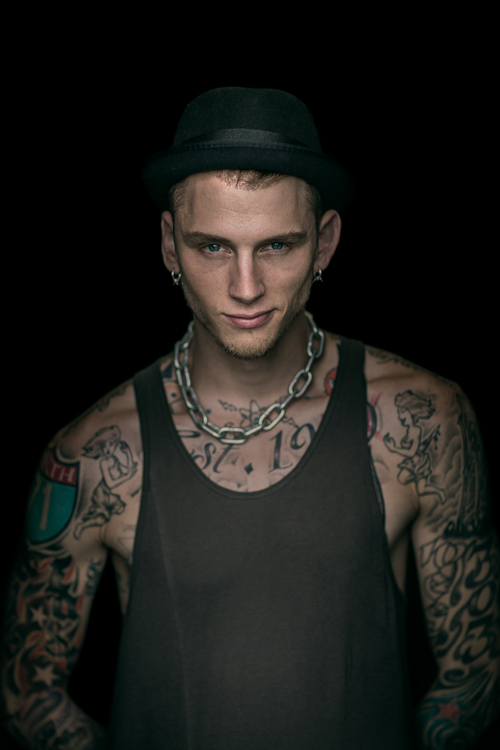 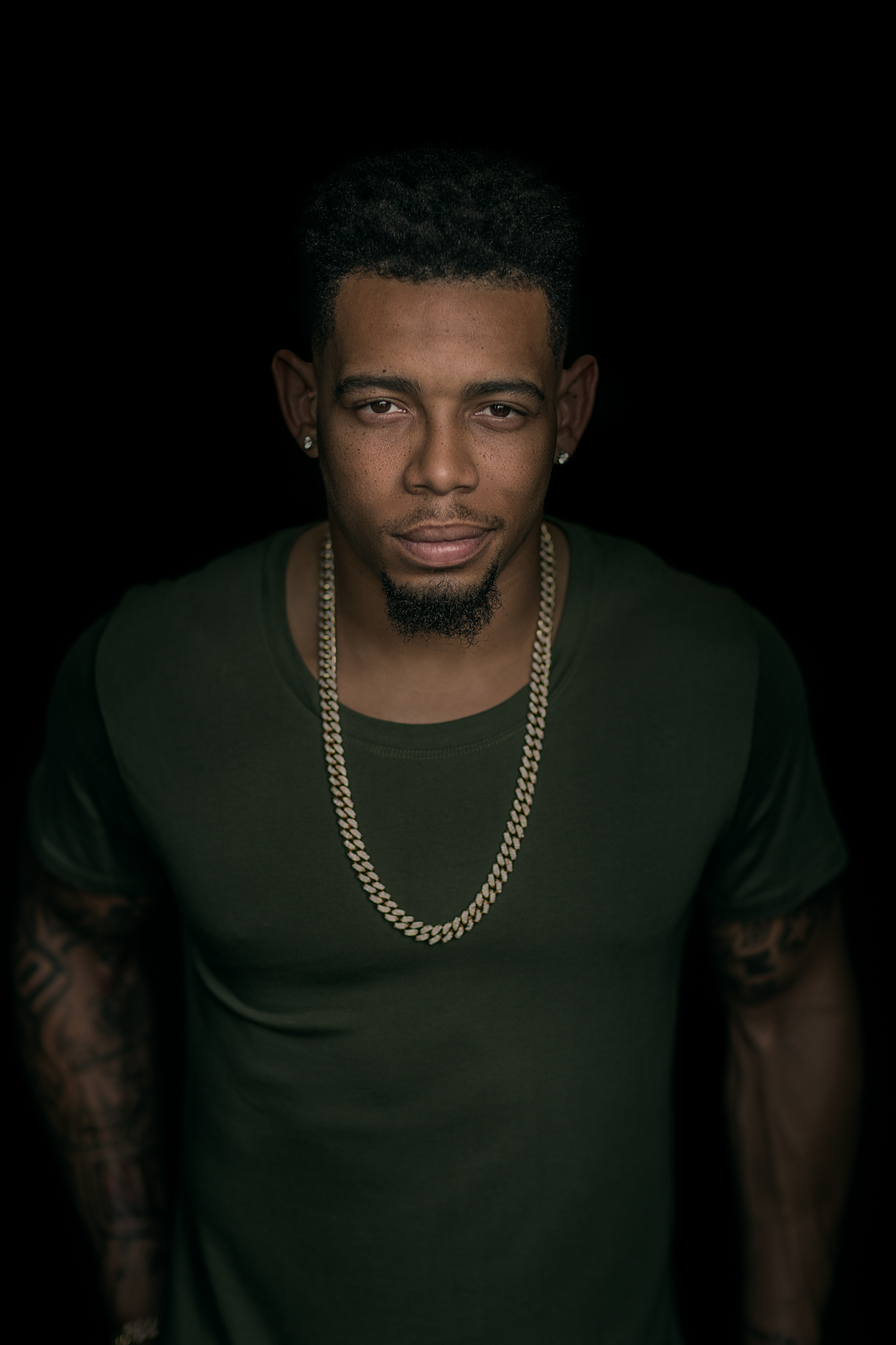 Above: Joe Haden of the Cleveland Browns. 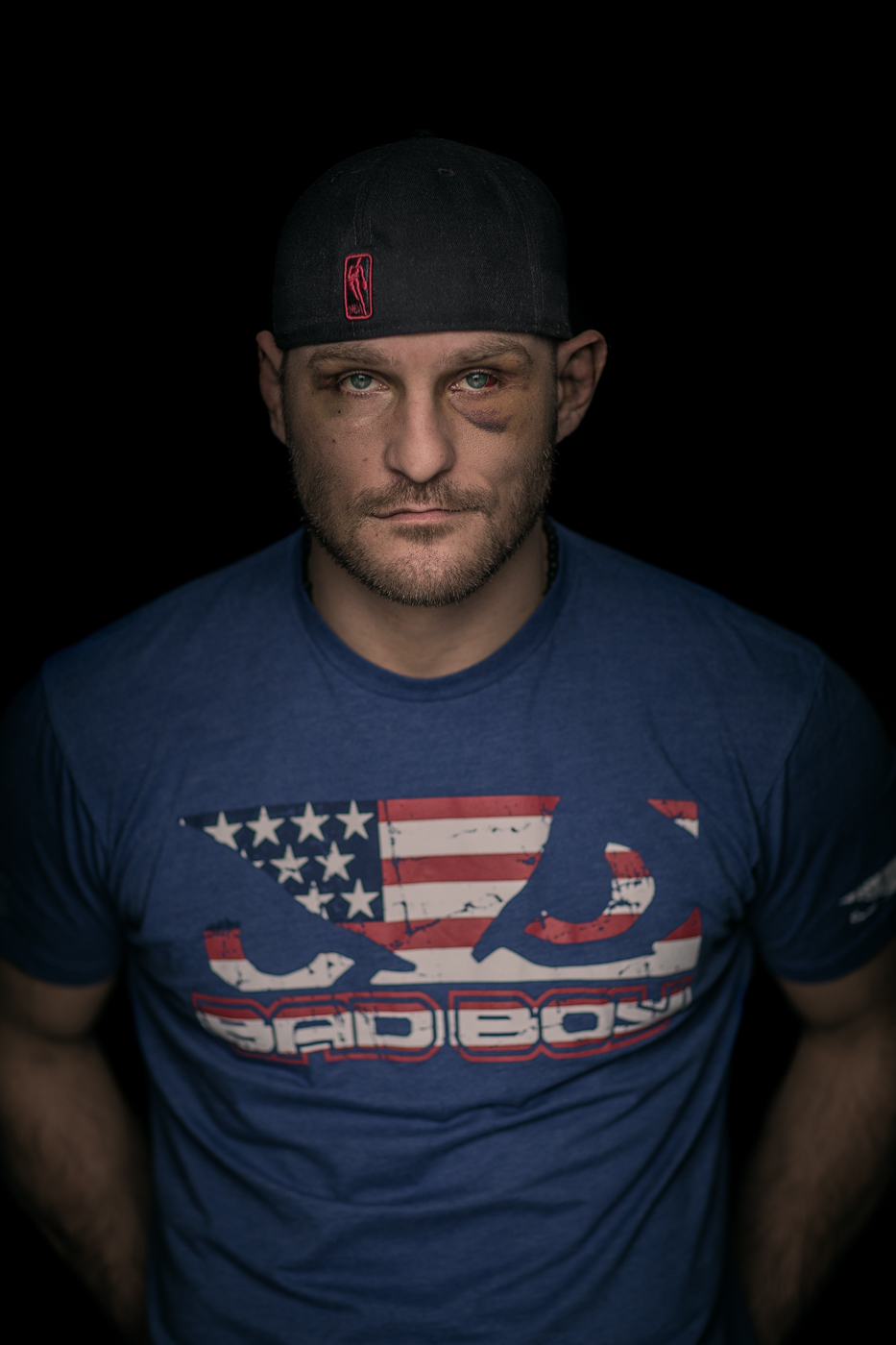 Above: UFC Heavyweight Champion of the World Stipe Miocic 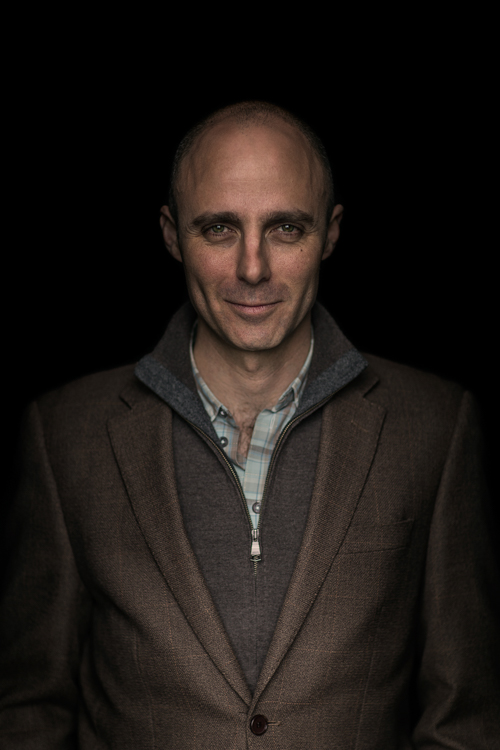 Above: Dan Moulthrop CEO of The City Club of Cleveland. 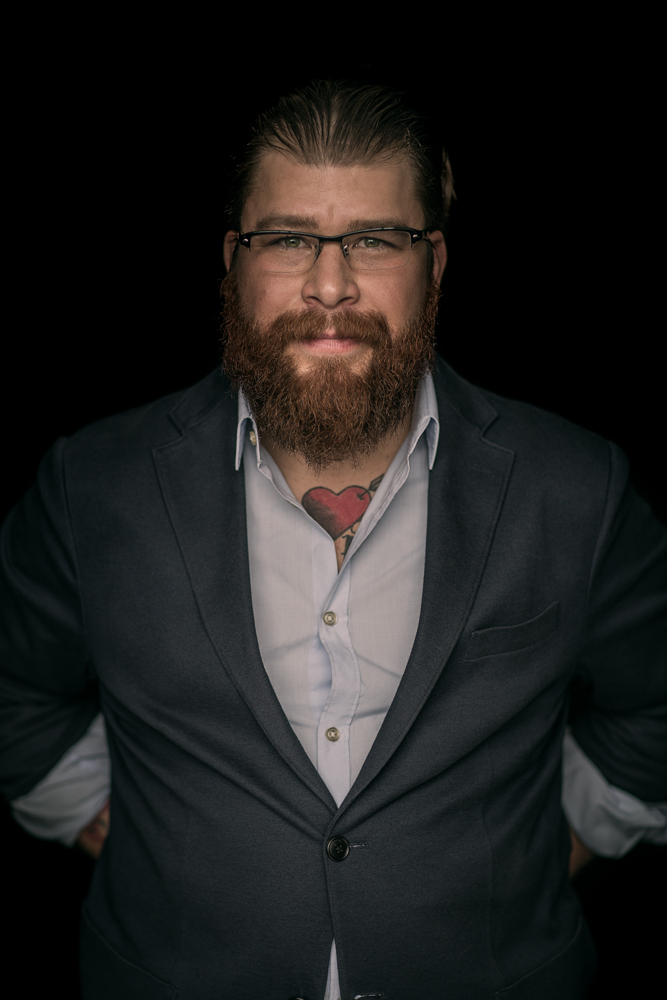 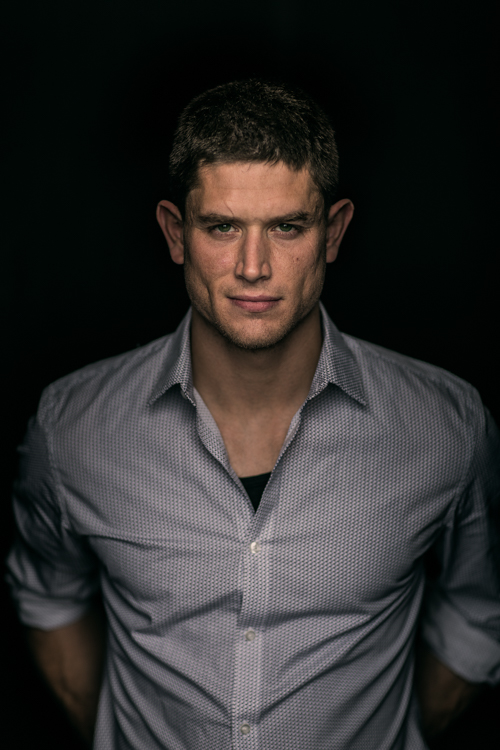 The images here are an unapologetic view of those who live in and love the city of Cleveland. These individuals are working to raise this city’s profile during a dynamic chapter in its history. Each Dark Portrait leaves its subject little room to hide. As a result, each portrait has met a mixed reaction from the public and sometimes even the subjects themselves. Most subjects who have had their turn are thrilled with the results, while some are shocked to see themselves in such an unadulterated fashion. 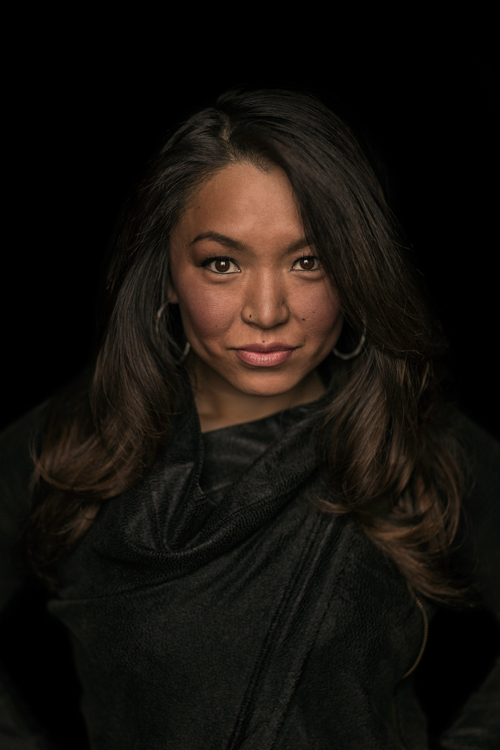 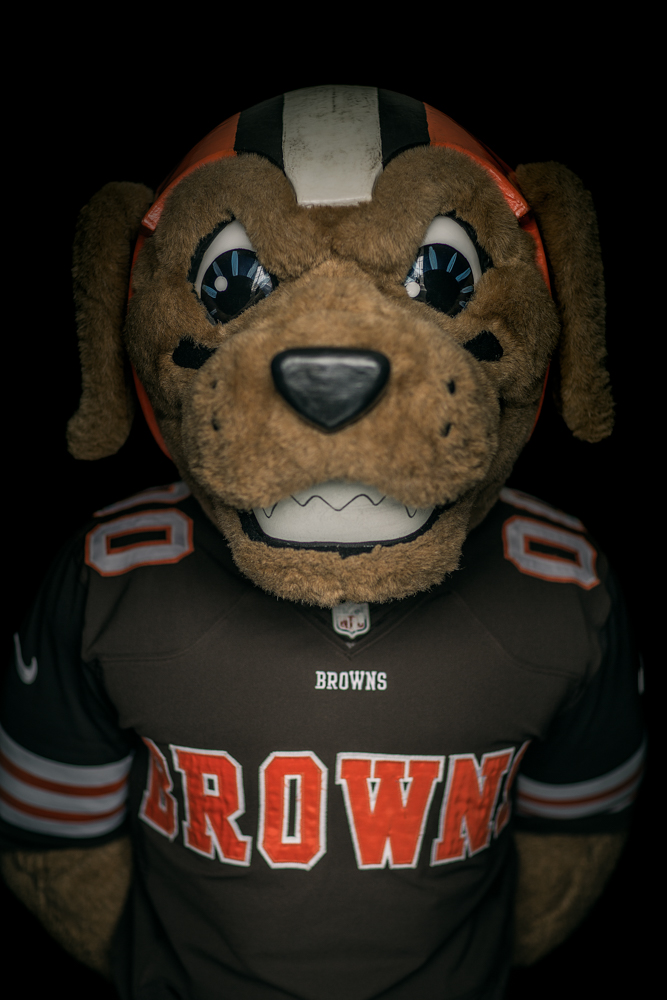 Above: The number one Browns fan and lover of bones… CHOMPS!!

Cleveland is changing rapidly and its businesses, politicians, and especially creatives are being taken more and more seriously throughout the country. We are no longer a town to be trifled with. It was very important to me to create a series that reflected that sentiment.  These are serious people who mean serious business. This is no longer a town where ‘just okay’ is good enough anymore. Whether they’re a Grammy Award winning musician, my local barber, or a syndicated radio host, Clevelanders are not messing around. These are people pushing the envelope in so many ways, fighting fiercely to shed the notion that the citizens of Cleveland, Ohio can be brushed off.  The viewers of my work and the work of other creatives in this town are more sophisticated and savvy than ever before and can spot over-processed images a mile away. 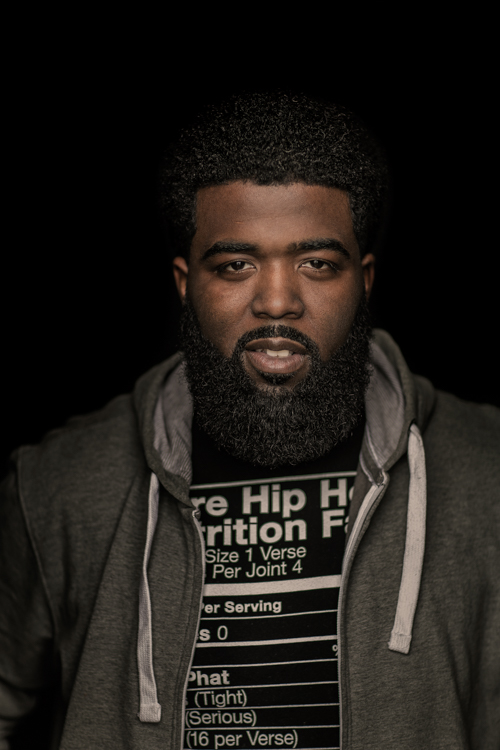 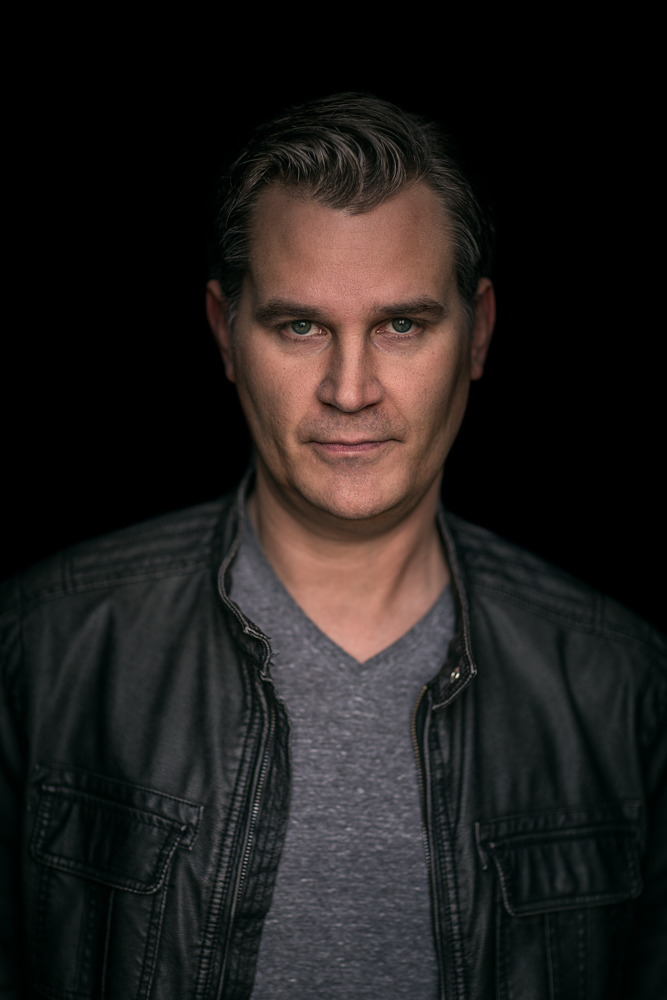 With audience sophistication on the rise, I knew I needed to challenge myself if I wanted to make something special. I chose to shoot these images using only daylight, along with about $45 worth of foam insulation and Sherwin Williams paint. No expensive lighting, complicated reflectors, or fancy equipment…just that big, beautiful 18kW in the sky and some nice big windows. Shooting in daylight is always different. Is it cloudy? Is it sunny? Even noticeably humid days can change the quality of light. I’ve also been shooting these portraits off and on since October of 2013 and I swear I’ve even noticed my mood on any given day affecting how I crop the images.  Because of these many variables, the images vary. I think it can be beautiful to let go a bit and allow room for disparity  to creep into your work. 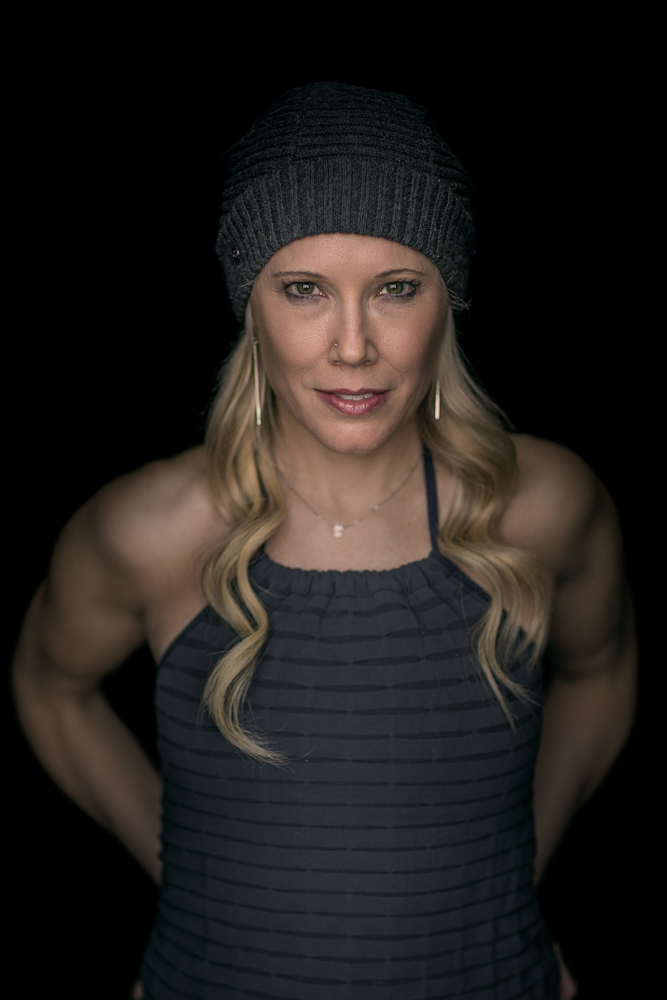 Above: Tammy Lyons, owner of Inner Bliss Yoga and founder of Believe In CLE. 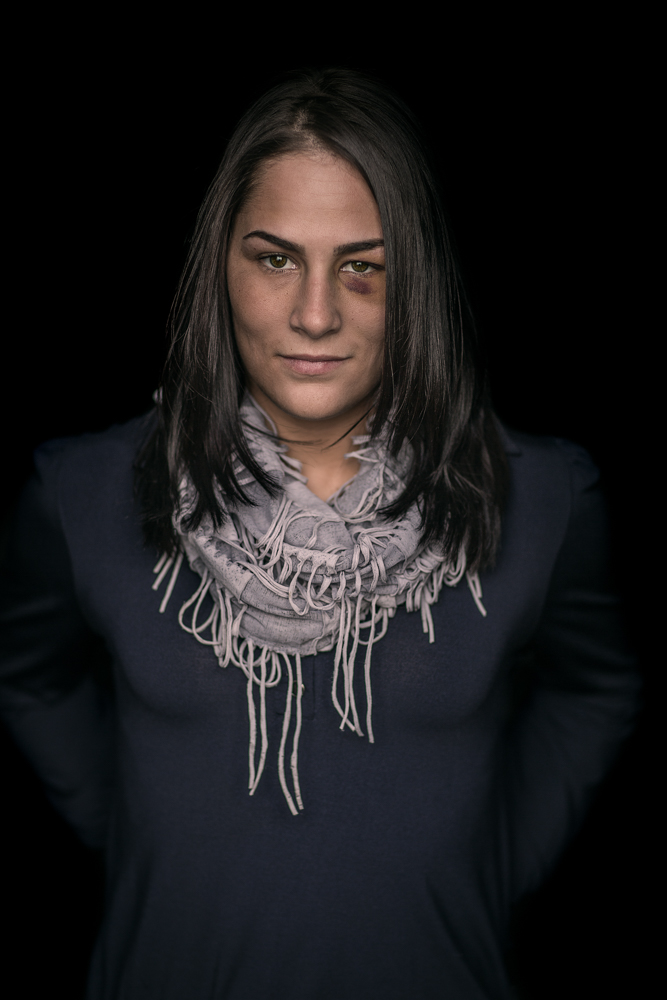 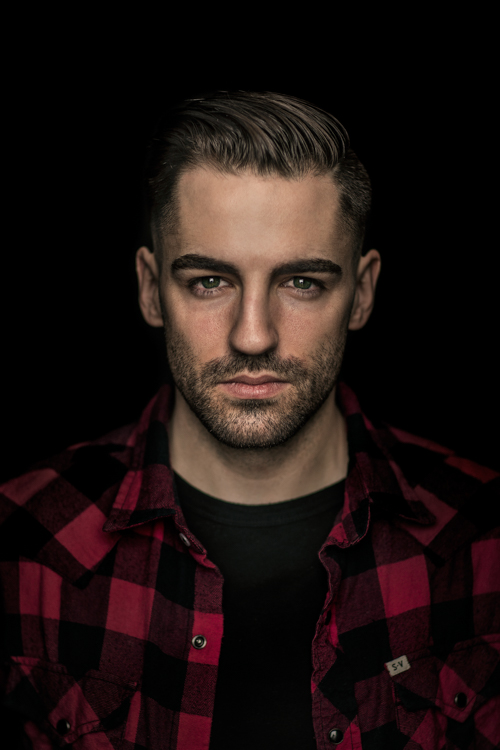 Above: Eric Vajda aka DJEV. 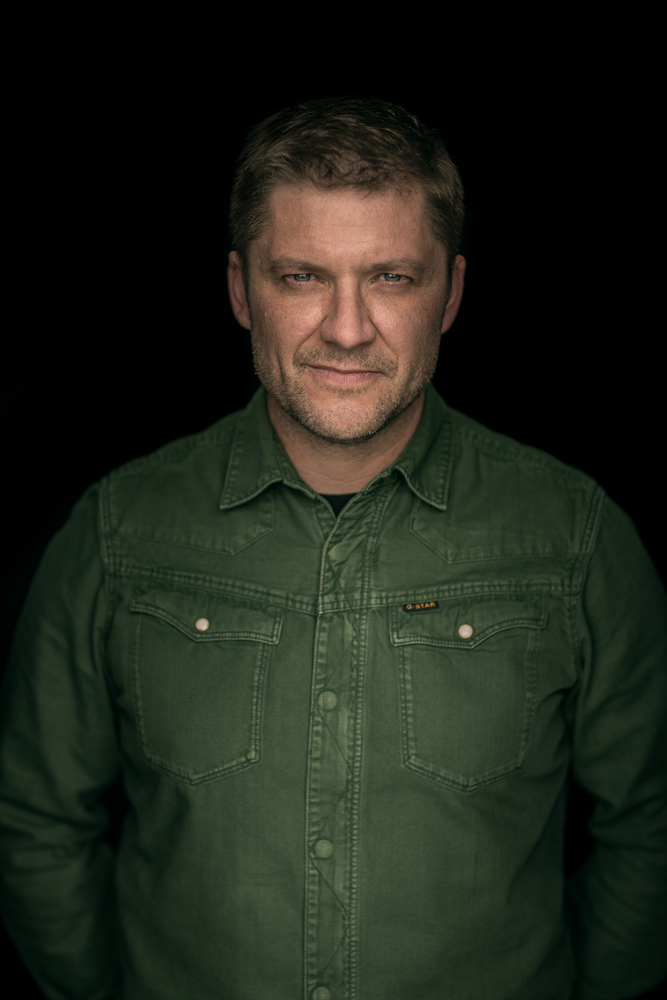 Above: Paul Voinovich Principle of Vocon.

While the Dark Portrait facial expressions may vary slightly, there are no cheesy, shit-eating grins or awkward back bends to struggle to maintain. Each person is asked to place their hands in their back pockets, take a deep breath and close their eyes.   This pose is meant to reveal as much as possible to the viewer as the entire face is evenly lit and central to the image. There is no room for the subject to hide their “bad side.”  They are then asked to reflect on a time when they either triumphed over adversity or been bested by it. Whatever memory the individual thinks of while their eyes are closed, when they open them that memory is painted right on their face. Some seem happy. Some seem menacing. And some seem to have an ace up their sleeve. 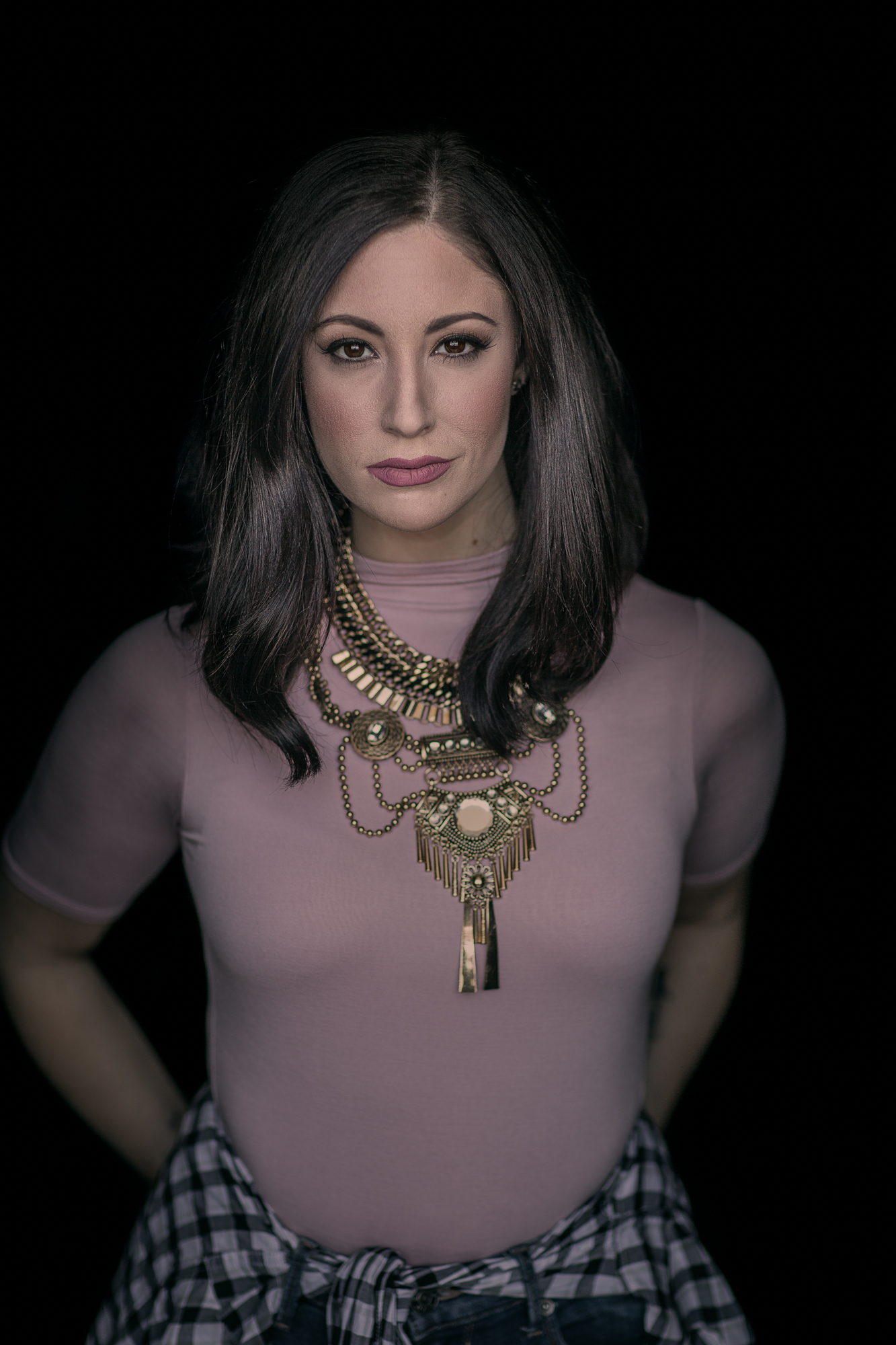 Above: Erika Lauren’s “bad side.” 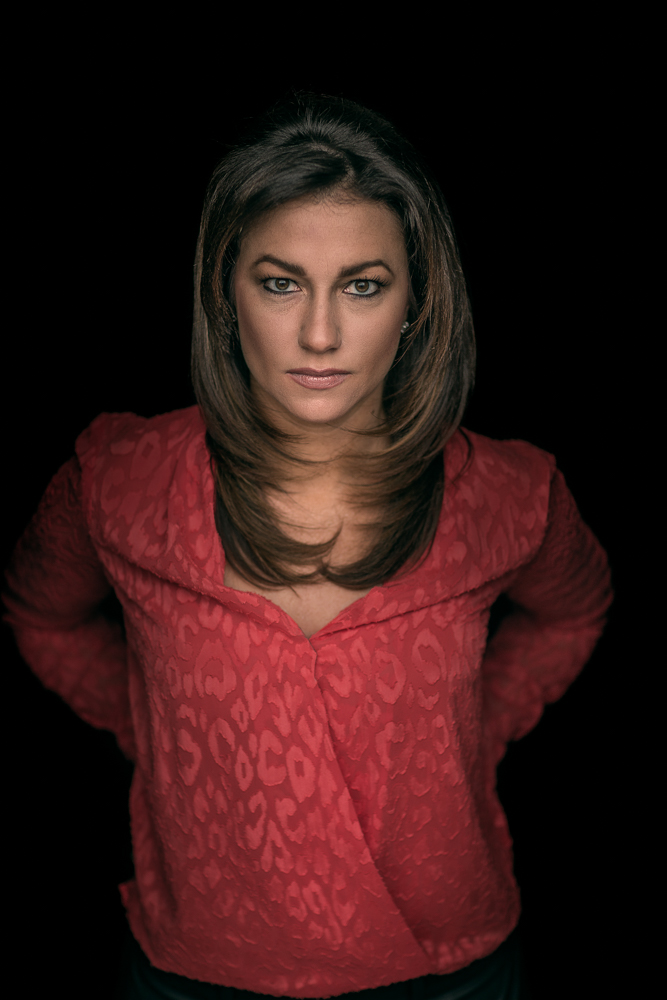 Above: Natalie Herbick’s “bad side.”

Some of the portraits were taken with the Phase One IQ 160 digital back and the 645DF Medium format DSLR Body at f/2.8 but most of the portraits were shot with the Canon 5D Mark III and the Canon EF 85mm f/1.2L II USM  at f/1.8 to create a similar depth of field to the medium format.  Since the subjects were told to lean slightly forward having this shallow depth of field allowed me to only keep the subjects face in true focus, to the point where the tip of the nose and back of the eyes becomes slightly blurry.  I found that the Canon’s autofocus was focusing on the eyelashes and leaving the iris slightly blurry, to compensate for this I use autofocus to get close then move myself a few millimeters forward to catch the iris.  Creating this effect was something I struggled with greatly early on, but now have down to a science… well sorta. 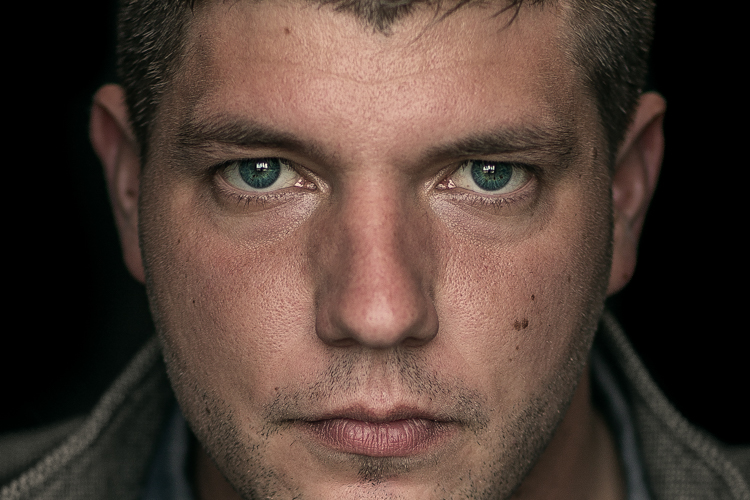 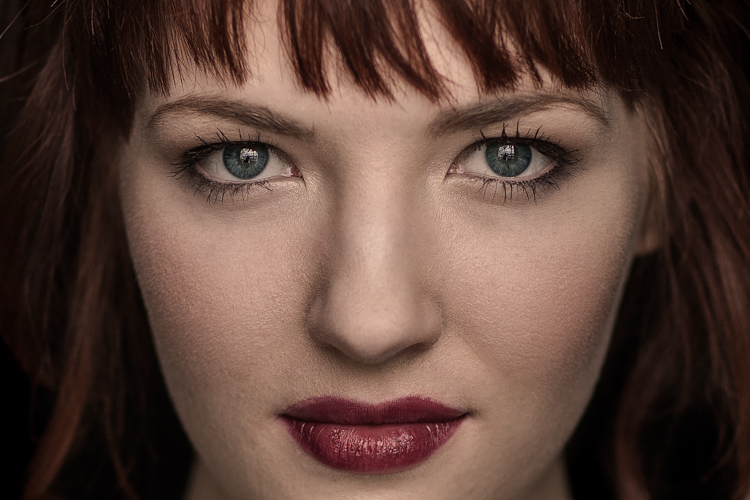 So often today we see moles, wrinkles, scars and even pores being wiped clean from the faces of our subjects. You wouldn’t wipe the iconic green patina from the Statue of Liberty, anymore than I would buff The Thinker by Auguste Rodin back to it’s original bronze.  Some view these elements as flaws or imperfections but I choose to view them as character that gives dignity and life to a portrait.  After all I believe it is these so called imperfections that make us who we are… which to me sounds a lot like Cleveland. 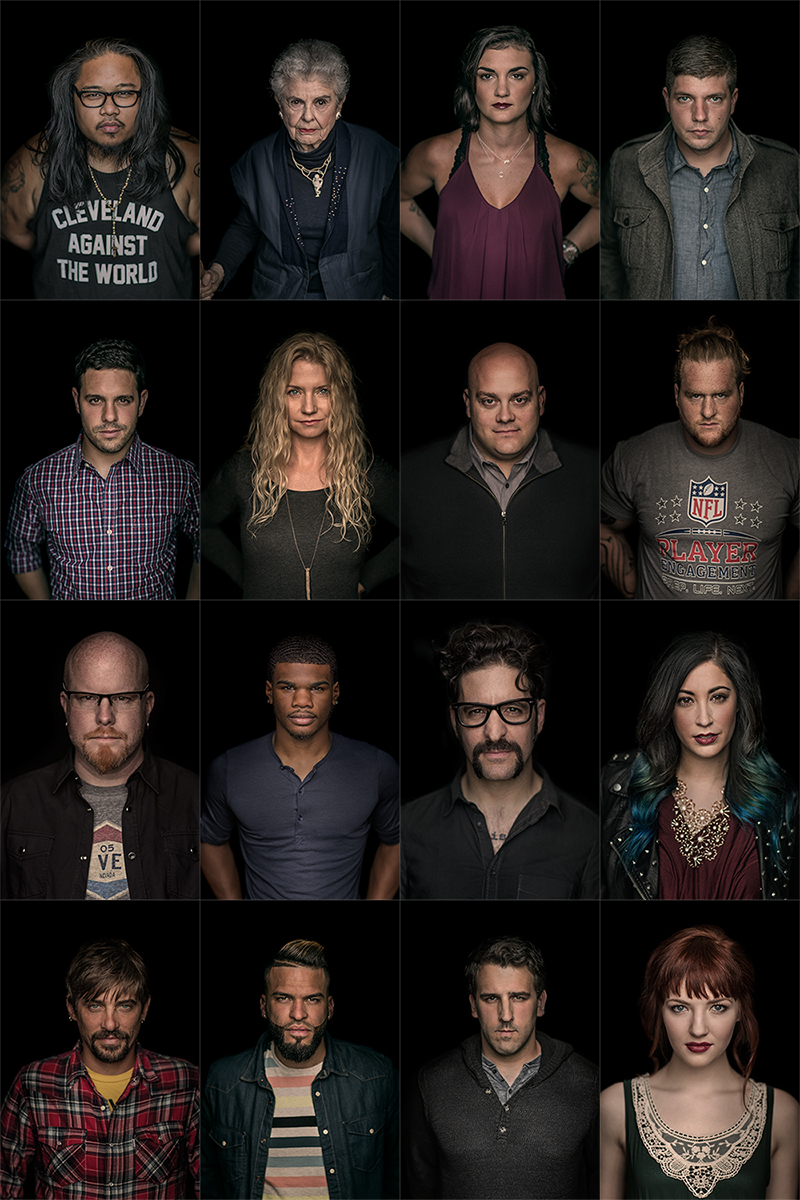 Above: Some of the many variations caused by lighting changes, season or even my mood on any given day

And here’s another STUNNING!!!!! lighting diagram drawn in exquisite detail by our intern-du-jour Jordan Reynolds.  This seems to be significantly easier to understand than the last one we did for High on the Hog. 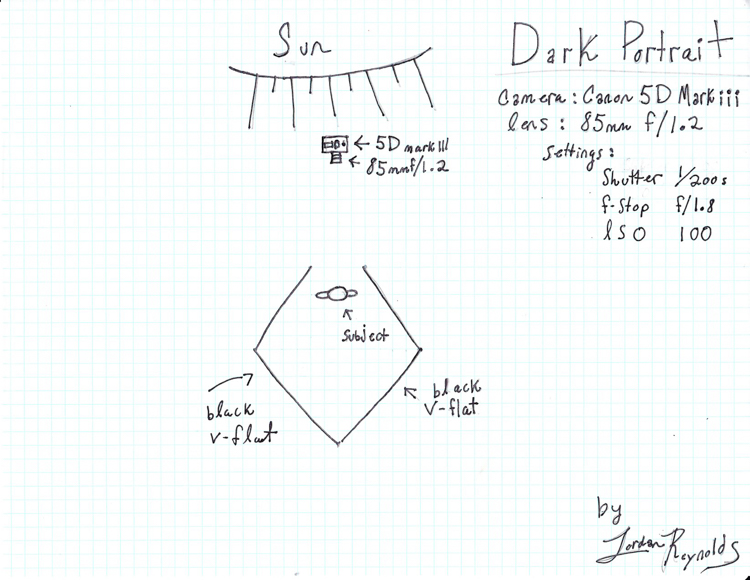 Main Light: A west facing window between the hours of 9am and 2pm Main Light Power Source: The Sun

For any additional info or questions concerning the shoot or to suggest someone please contact Info@JamesDouglas.com

PREVIOUSHigh on the Hog...
BACK TO BLOG