Today’s post is all about making messes… and cleaning them up. Putting in the hours, (night or day), working around other peoples’ schedules, and planning for the worst but expecting the best. It’s about letting loose and letting go, allowing pictures to simply “happen,” rather than trying to meticulously plan out each shot. Many people think photography is all about controlling as many variables as possible, but often times the best photographs happen when things get a little out of hand. 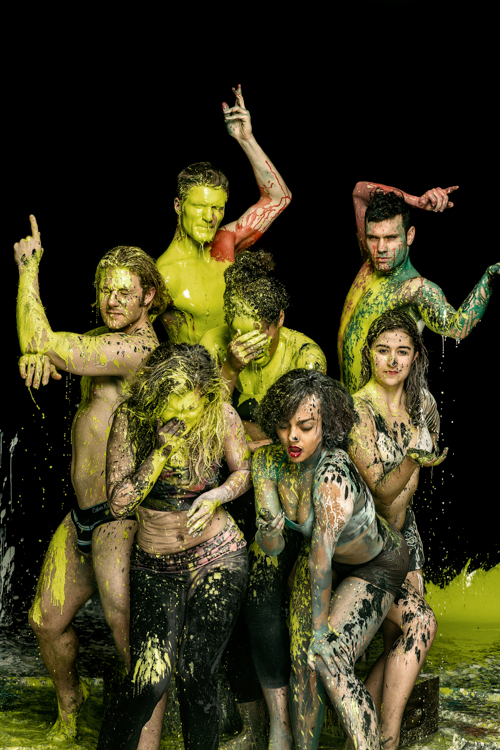 This journey doesn’t have a definitive start nor a neat finish (clearly), but the outcome was well-worth the process. You could say this all started when I became interested in learning more about photographing liquids. I did a test with Cleveland-based Sherman Williams paint the day before pitching to a local advertising agency, Adcom. After the meeting I found a kindred spirit in photographer-turned-Art Director Derryl Strong, one of Adcom’s rising stars. After a few emails and a few more beers, he asked me if I would help document Wicked Wonderland a charity event put on by his lovely wife Rebecca who is the Director of Development for The AIDS Taskforce of Greater Cleveland. Of course, I wanted to help and jumped at the opportunity to give back to a charity I believe in.  When local photographer and close friend Jason Thomas Crocker heard about what we were up to, he insisted on donating his extensive wedding and event photography experience to the cause… you can see a few photos of his here. The event was incredible and afterwards, over pizza and beer with some of the cast, an interesting idea came to mind.

I suddenly had the urge to pour green, white and black paint over the show’s cast at my studio and shoot the entire process before they left for the next city. The cast members, also having knocked a few back at this point, thought it was a great idea!! 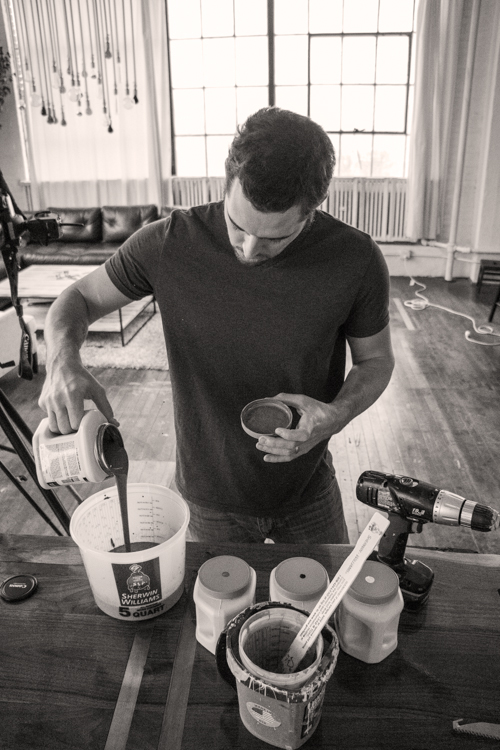 Above: Mixing up a batch of “green” Photo by Alex Gradisher 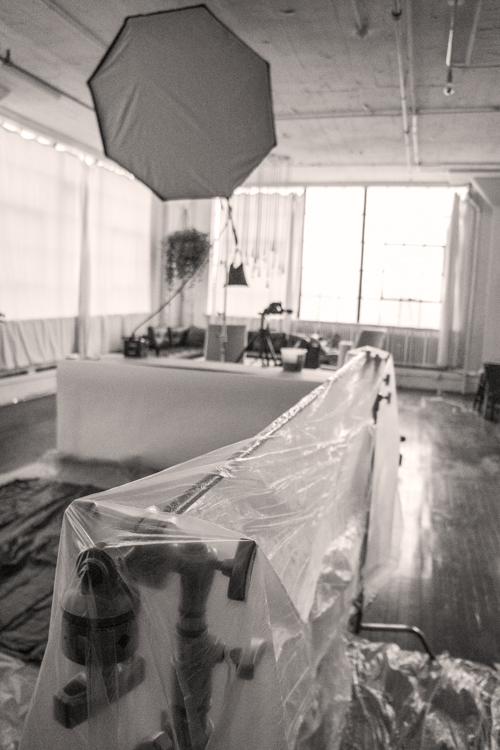 Above: Our attempt to contain the madness during pre-light would soon be rendered useless… Photo by Alex Gradisher

After a little back-and-forth scheduling with my point man and fast friend Ryan Jackson, we came to the realization that 11 PM, after one of their shows, was the time that worked best for everyone. Derryl luckily was able to come by for a pre-light test the day before the big shoot, which helped shed light (pun intended) on some technical issues we would be facing, such as flash duration and splash radius. But thankfully, with the help of Jason Thomas Crocker, I think we got pretty close. 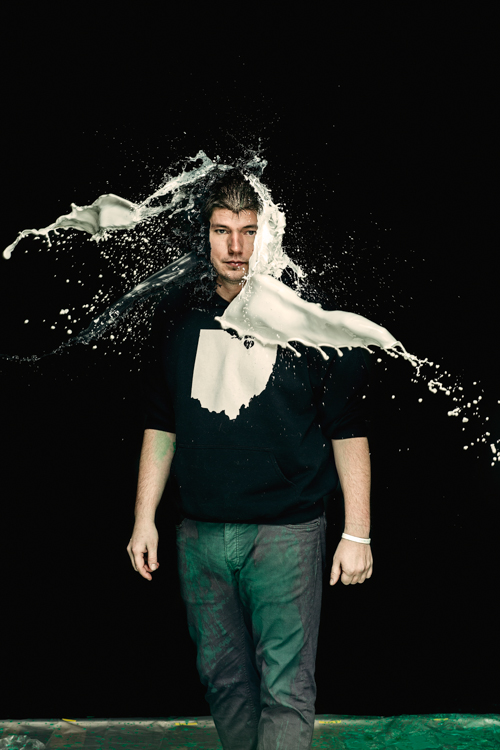 Above: Jason Thomas Crocker was kind enough to stand in for some last minute tweaking… twice.

Shoot day would come with a giant dose of the realities that often plague Cleveland, Ohio-based creatives. 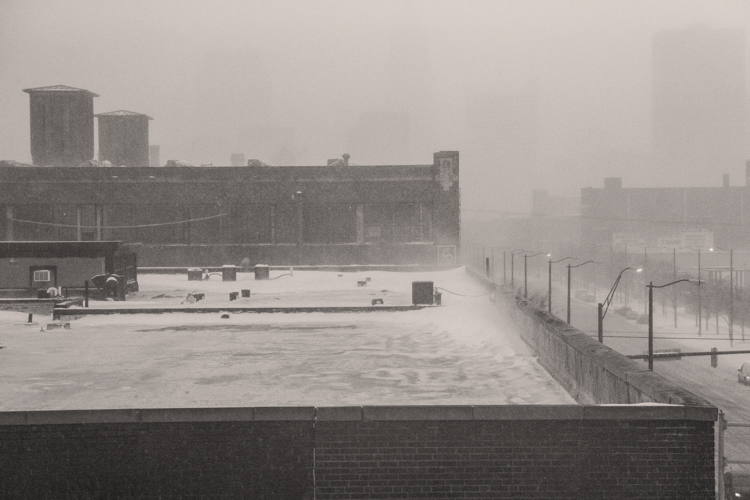 Above: Even with a windchill well below zero everyone showed up right on time… beers in hand!! Photo by Alex Gradisher

In no time at all, the paint started flying, people started cheering, and the floor slowly began taking on the appearance of a rainbow-covered swimming pool. No amount of tarps, paper towels, or soap in the city of Cleveland could keep this place or our studio hound Ginnie, clean. And some things to this day still aren’t even de-greened, including little Ginnie. 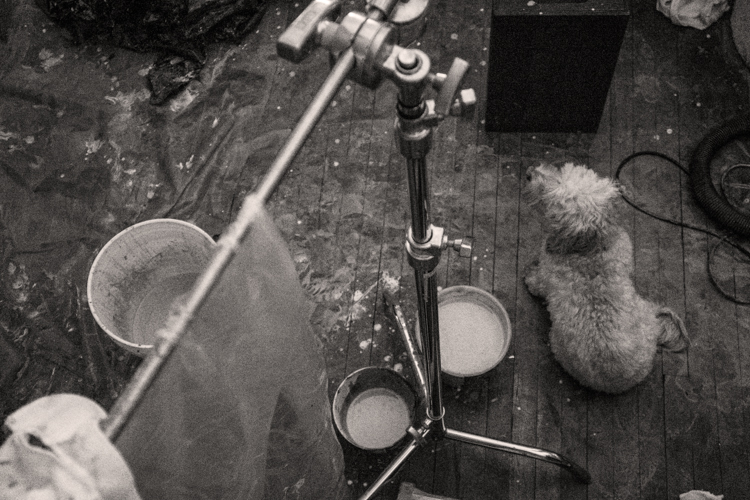 Above: Ginnie making sure things don’t get out of hand.  Photo by Alex Gradisher

Despite Ginnie’s best efforts at keeping things under control things quickly spun out of control, in the best way possible.  Please note: There is no compositing in any of the following images, all elements contained in each image were made ENTIRELY IN CAMERA. 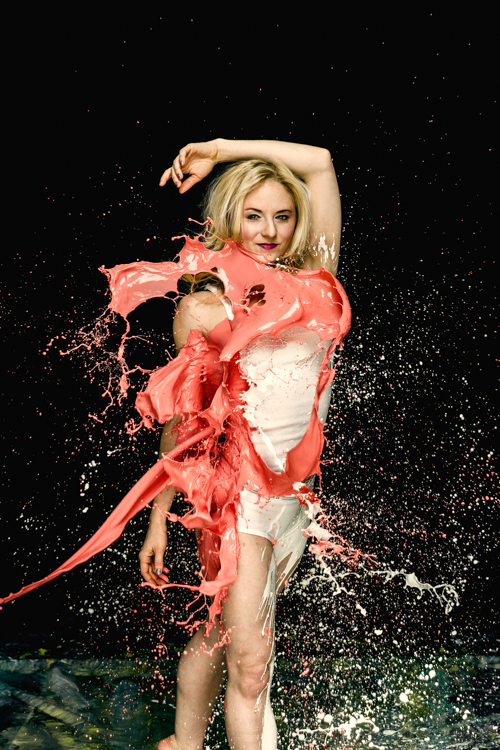 Above: Hayley Podschun nailing it right out of the gate. 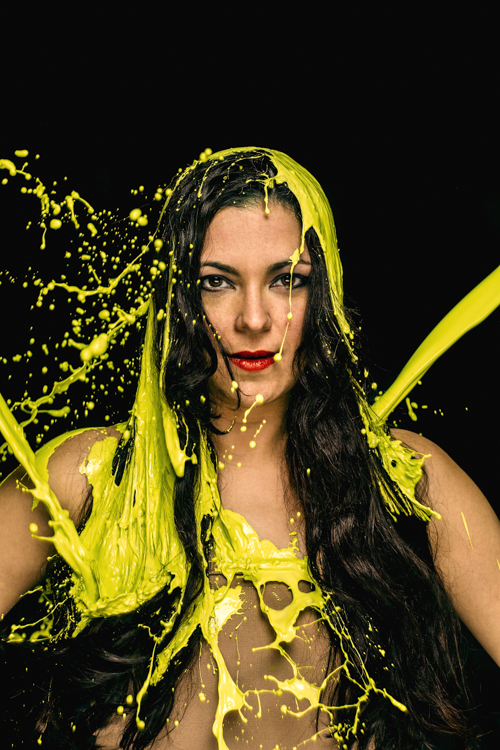 Above: The incredibly talented and beautiful Jennifer DiNoia. 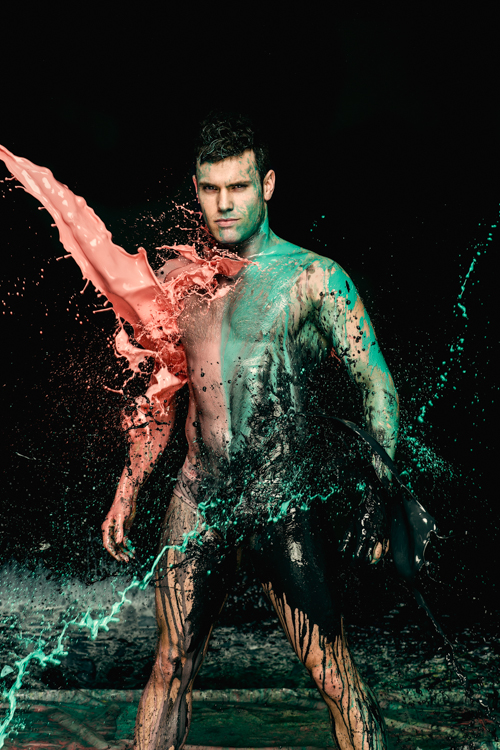 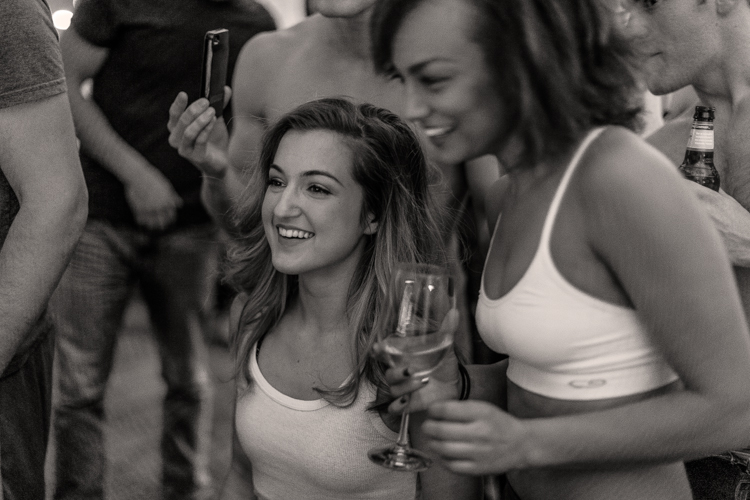 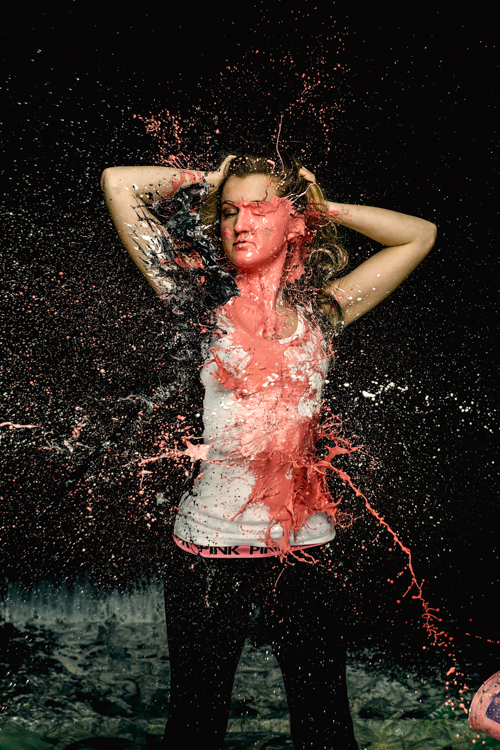 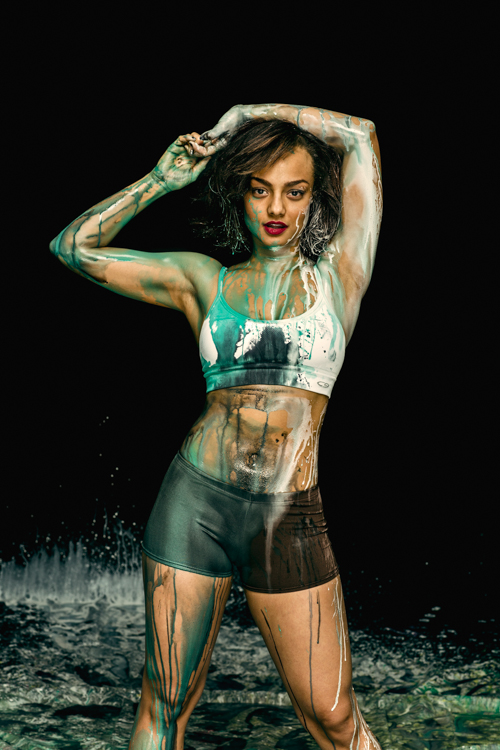 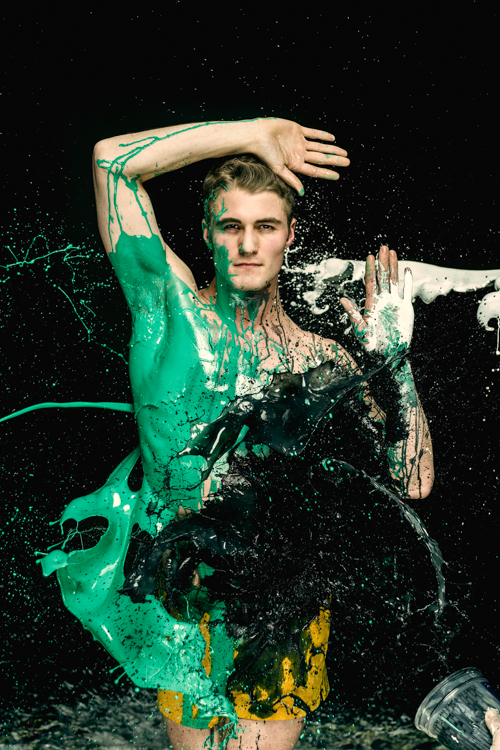 At this point, Angelo Merendino, another Cleveland-based photographer, best known for his stunningly beautiful and emotional photo series “The Battle We Didn’t Choose: My Wife’s Fight with Breast Cancer,” came to create some rather unique portraits and behind-the-scenes images, since there was more going on than anyone of us could hope to capture. His presence alone at the shoot made the experience all the more successful.  We were honored to have him here and will share his images in a later update. 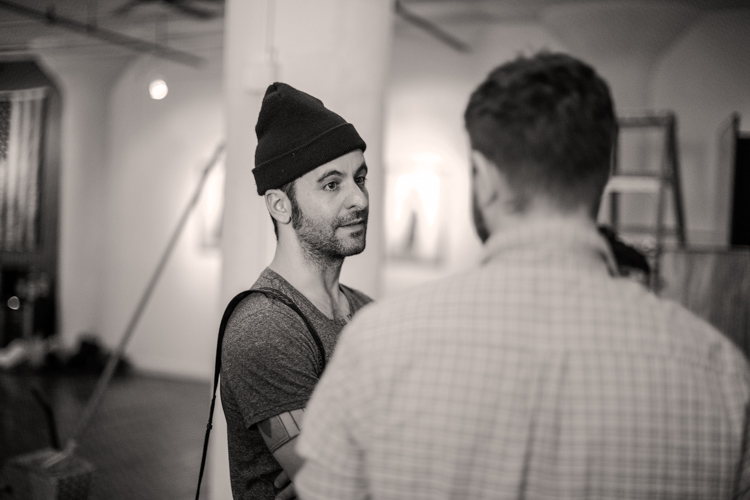 By now it was 1 AM. As more and more friends started stopping by, what had started out as just a learning experience and experimental shoot was quickly turning into a party.  Since I was shooting with my Canon 5D Mark III tethered into Adobe Lightroom, my computer screen quickly became the hub for creative discussion and introductions. 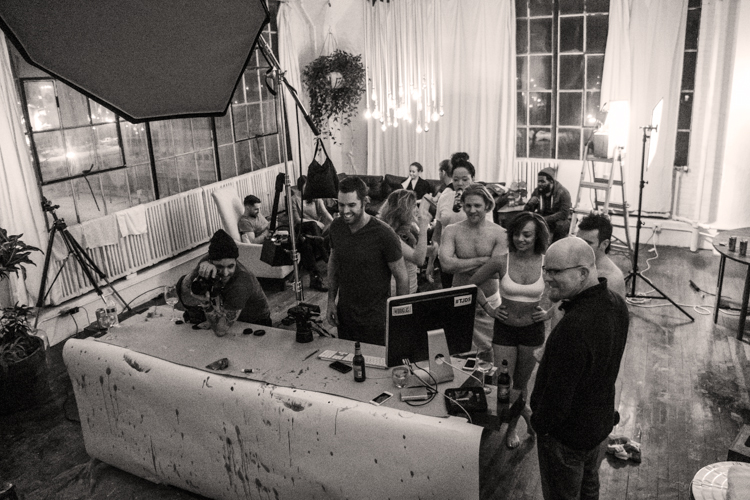 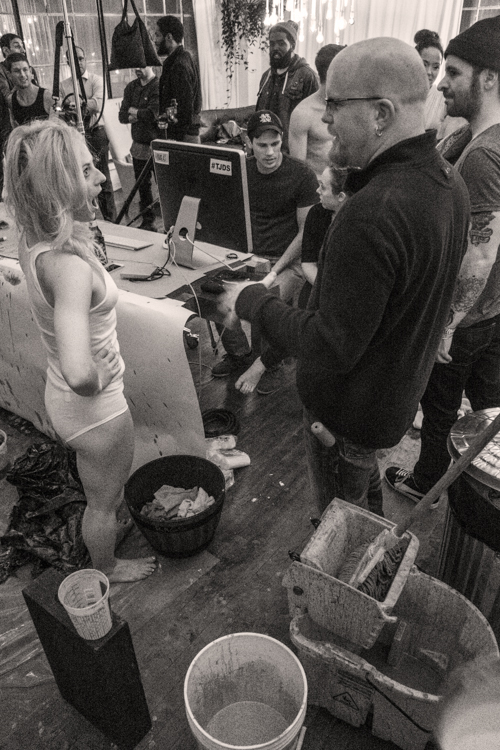 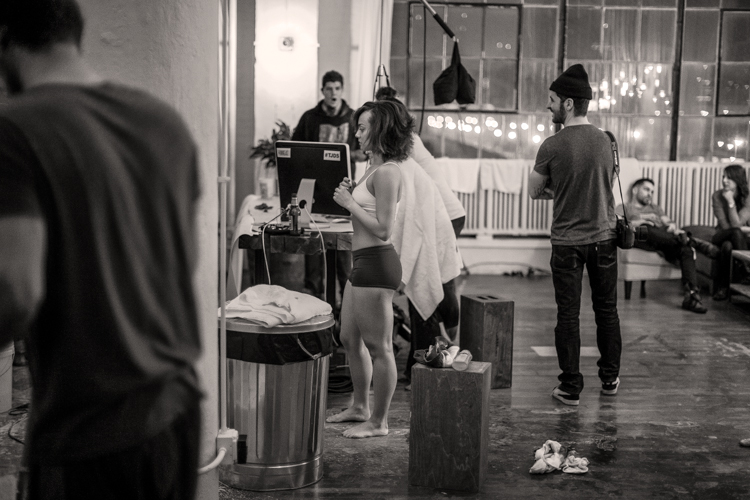 Above: Haley Dorling and Angelo Merendino. Photo by Derryl Strong

Any thoughts I had before the shoot regarding how the photos would turn out were soon replaced by something else completely.  Since this was a personal project rather than a commissioned job with a specific goal,  I decided to go with the flow. And that’s when the real magic started to happen. Please note that some of the following images contain nudity. 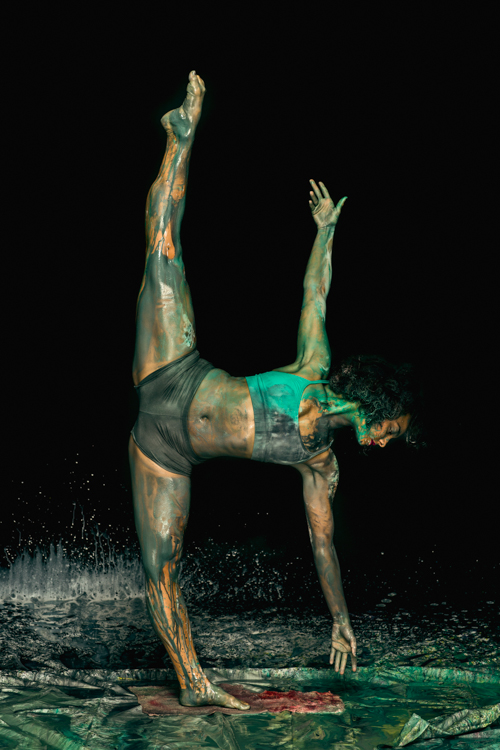 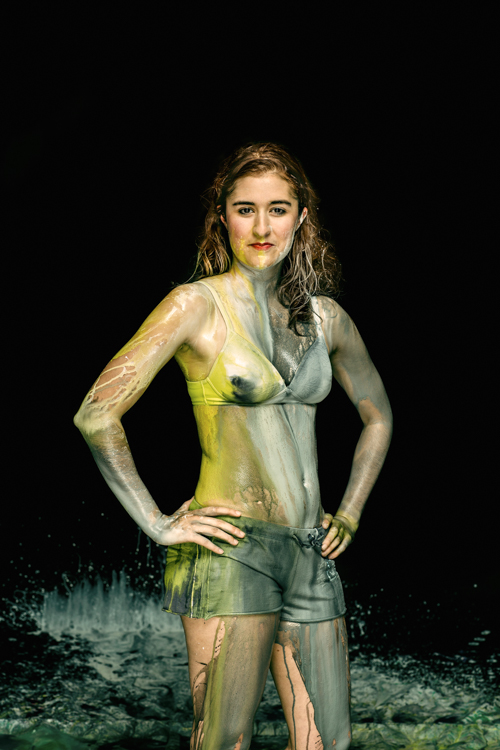 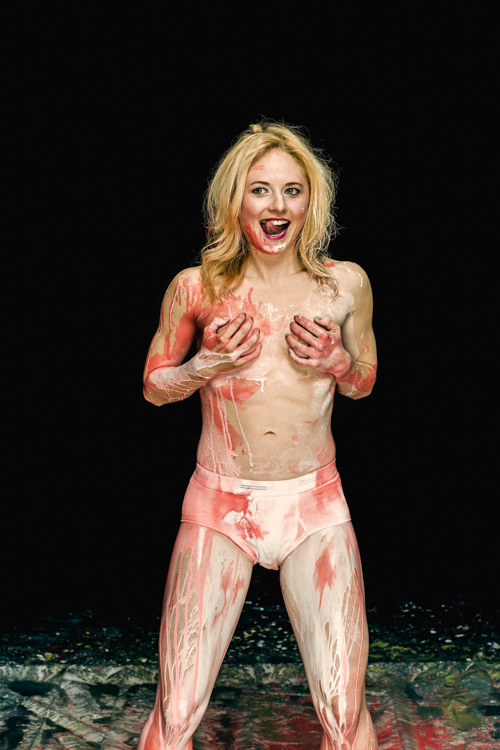 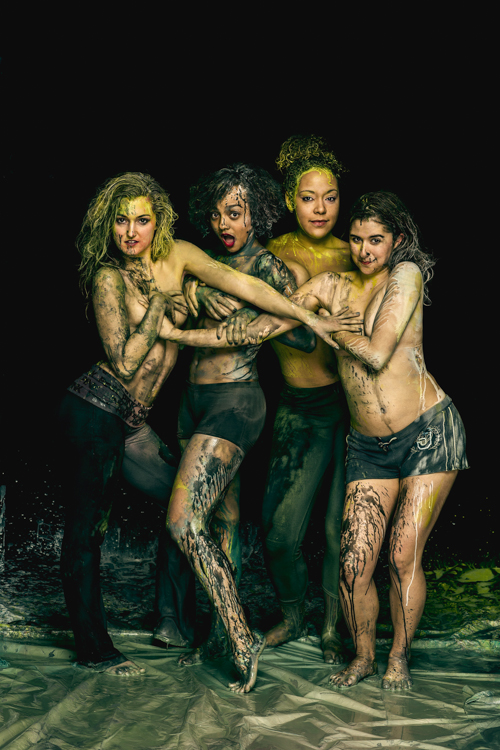 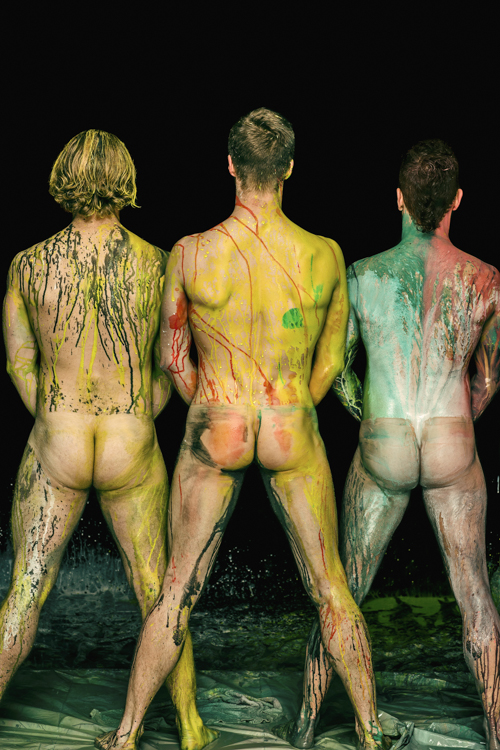 By now it was past 4 AM and people were coming to terms with their exhaustion, we all started slowing down, not realizing how many great photos we got out of a night that felt more like a get-together with friends rather than a professional photoshoot. As people trickled out, COVERED in paint, I took inventory of the studio and the total nightmare we had created. It’s amazing how much fun making a mess can be. After all…

“If you’re not having fun, you’re not doing it right.” – James Douglas 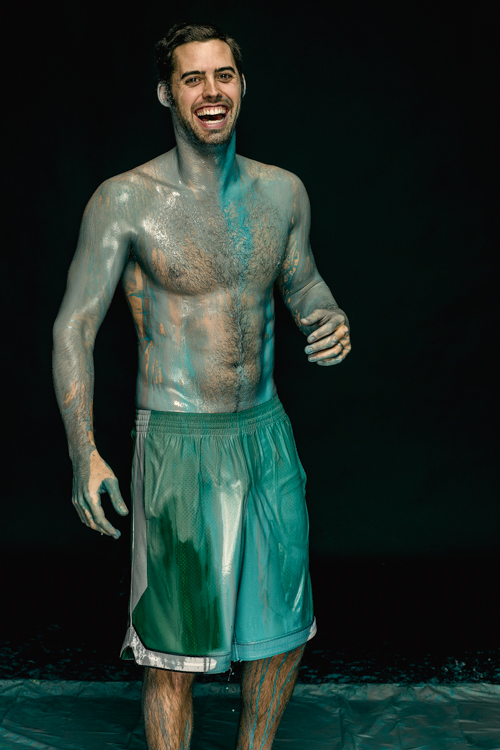 Below is a lighting diagram “meticulously” drawn up by my trusty assistant Alex Gradisher (or at least something close to what we ended up with and a list of the equipment used).  I could get all nerdy with sync speeds and flash durations (T.1 vs T.5 etc…) for freezing motion but it’s getting late so just watch this video that does a better job explaining it far better than I ever could. 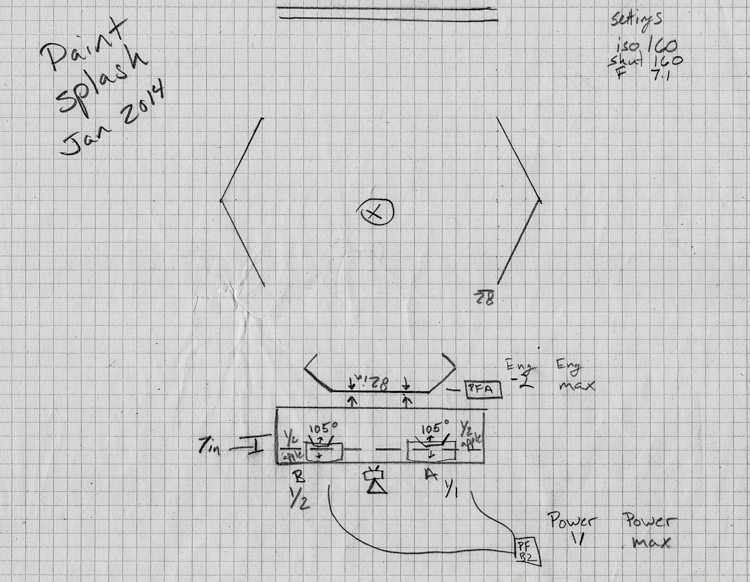