When Derryl Strong of The Adcom Group asked me point blank if I could keep it together for an entire day and suppress my… shall we say, less-refined self, I said 50/50. Apparently that was good enough for him because we immediately started brainstorming what we were gonna do with the new executive portraits for Moen. Having worked with Derryl in the past on Wicked Liquid and the super secret upcoming Blue Laws project, he had probably wondered how I’d handle a more corporate atmosphere.  As it turns out, I’m actually capable of wearing closed-toe shoes on set and keeping the F Bombs to a bare minimum… who knew?!?! Many things we knew right from the start: the whole page would be redesigned, we’d have to shoot on white, and these wouldn’t be your average corporate headshots.

We also knew that in order to sell these ideas, we’d have to show them a finished product. We set aside a day to test and create the visuals we would eventually pitch to the executive team, using Adcom’s creative team. While we wanted to push the envelope a bit with these guys, we also knew that they’d have to give keynote speeches, have their pictures in news articles, etc… so we decided that having the standard executive headshot might not be such a bad idea.

We also all know that behind every executive is a carpenter, snowboarder, golfer etc… so we thought it would be great to include multiple facets of their personalities in these portraits as well. And that’s where the “Hobby Shot” comes into play. 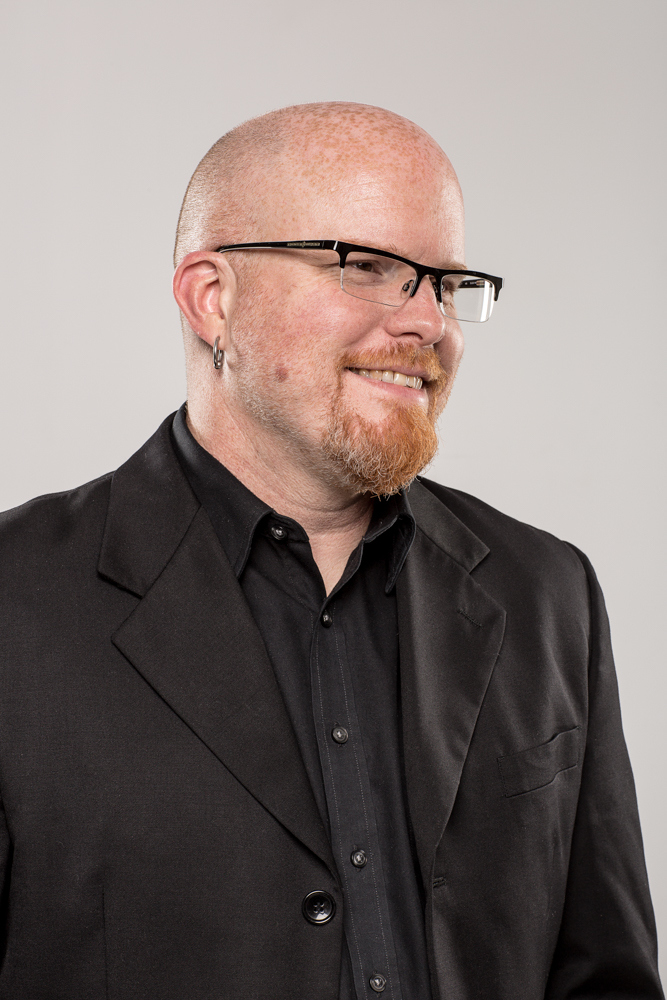 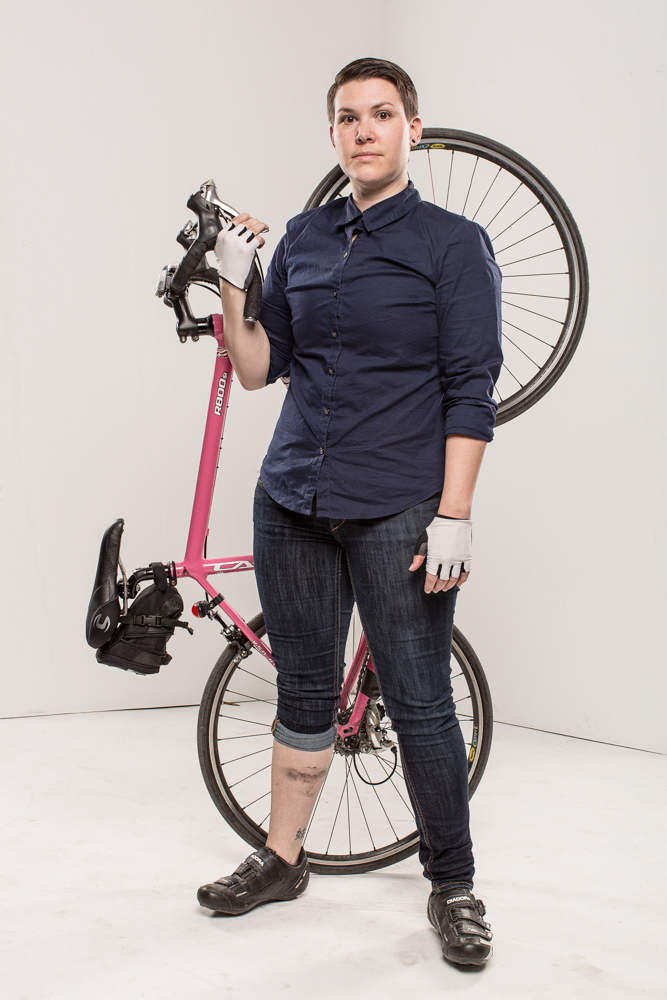 We also know how impossible it can be to get these guys all in the same place at the same time, think total Solar Eclipse. So we wanted to put together a composite image along the lines of a Hollywood movie poster. Here’s where we put together a rough version of the “All Star Cast” photo. 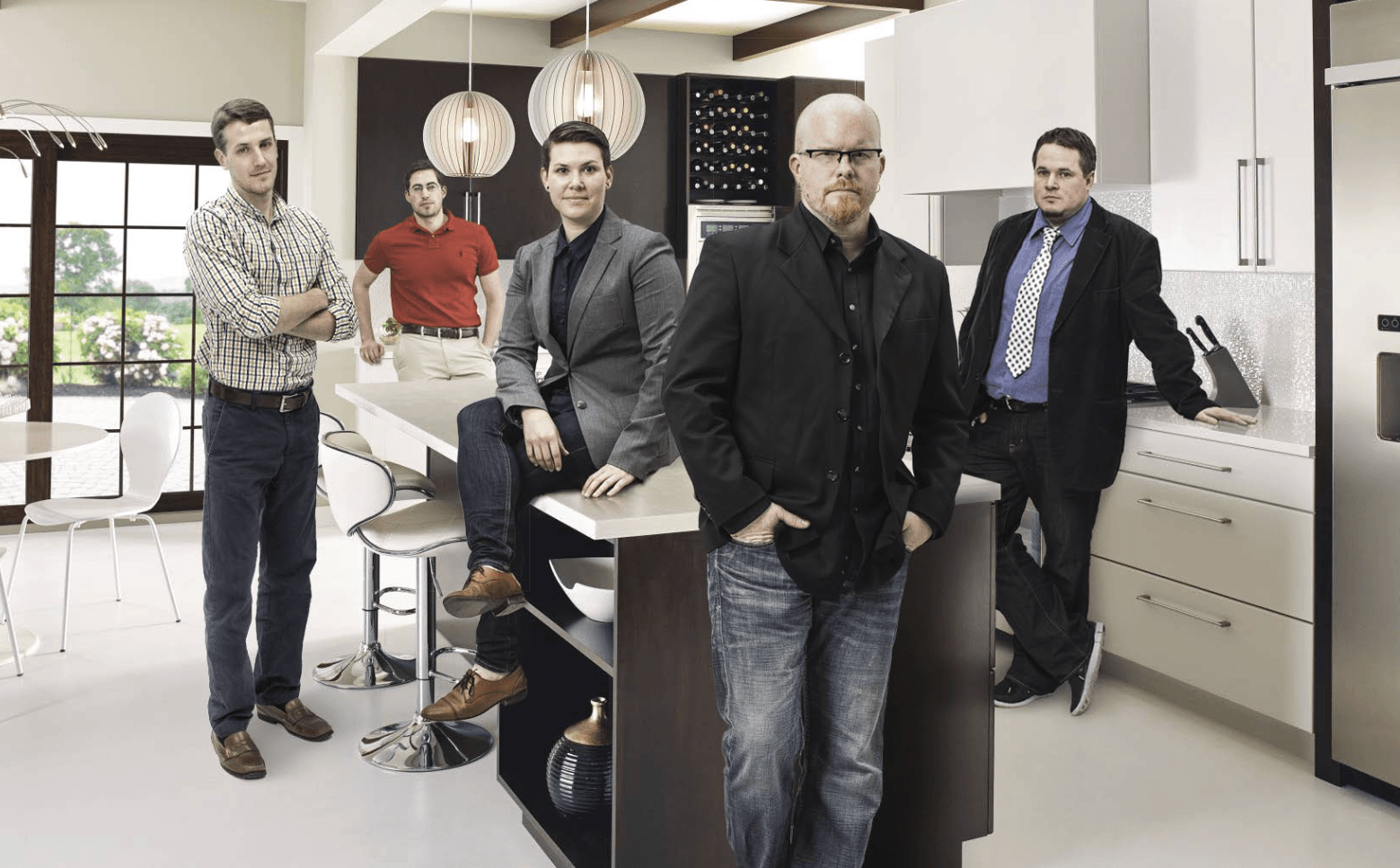 And since I am who I am and Derryl is who he is… we wanted to test the edges of our creative leashes and pitched the idea to throw water on them from behind. Dan Reisinger, one of Adcom’s Senior Account Executives, wasn’t entirely on board with it (at first), so clearly we had to make him our guinea pig. Even though they didn’t end up choosing this option… here’s Dan’s (first take) test shot!!! 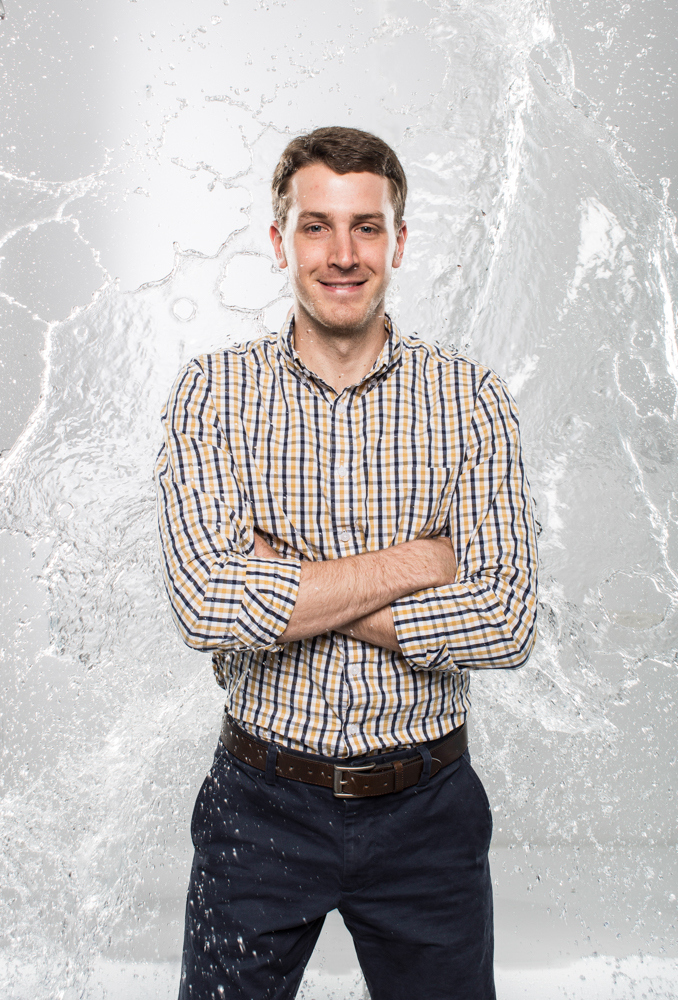 Above: Dan Reisinger finding out that timing really is everything.

So now having the visuals that we needed for the presentation, we put together a deck for them to get a clearer understanding of what we had in mind. I wasn’t around for the meeting but I’ve been told it went very well and that everyone loved the water shot idea, but would decidedly go another route. And I can’t really blame them since I wouldn’t want to be wet if I had a whole day full of meetings and presentations… Dan apparently didn’t mind though.  You can check out what that deck looked like and download it here.

We got the green light, budgets were approved, and the date was set in stone.  Quite literally since the entire executive team only gets together twice a year (if that), and it’s not always at their North Olmsted World Headquarters.  Since we did all the testing that we could possibly have done, we now had a chance to scout out the location for the shoot. Short ceilings, tight quarters, carpet, and 20 feet from the front door… this should be fun. With all of the testing out of the way, we knew exactly what we needed to do, and it was now just a game of hurry up and wait for shoot day to arrive. Since we’d basically be setting up two professional studios that had to actually look professional in a room used to showcase faucets and only had about 15min with each executive to get 5 shots of each including props and a more casual “no tie” look of each… we thought it best to set up the night before. So we packed up my entire studio, every strobe, C-Stand, apple box, V-Flat and roll of gaff tape… pretty sure people in my building thought I was moving out.

One thing I wanted to be sure we took care of was the fact that people walking on seamless paper in heels or dress shoes on carpet is a recipe for disaster.  We solved this by picking up six pieces of 4’x8′ ply and laying it down under the paper effectively creating a hardwood floor for each set.  We sketched the layout of where everything would be situated during the scout day so once we hauled everything over there in my trusty trailer, setup was just a case of following directions.  Even I was a little skeptical about what the final sets would look like, but in the end they turned out pretty awesome.

The shoot began and went like clockwork. Each executive would stop by my stylist extraordinaire, Maggie Kleinman, for wardrobe, makeup, and even get their suit professionally coiffed by the sartorially inclined Dan Toffolo… the devil is in the details people. They’d pop on set with me, and we’d have about 5 minutes with each of the three images we needed to capture. Even on that timeline we were able to toss in some suit variations and lose the tie for a more casual look, still don’t know how we pulled that off. I had figured that, as with most executive portraits, this would be the last thing that they wanted to take care of during their busy schedule, but it turns out that they thought of the shoot more like a short spa break in the middle of their hectic day.  That feeling was helped since we had some amazingly healthy catering and fresh juices from Anna Harouvis of Anna in the Raw to keep everyone hydrated and feeling good. 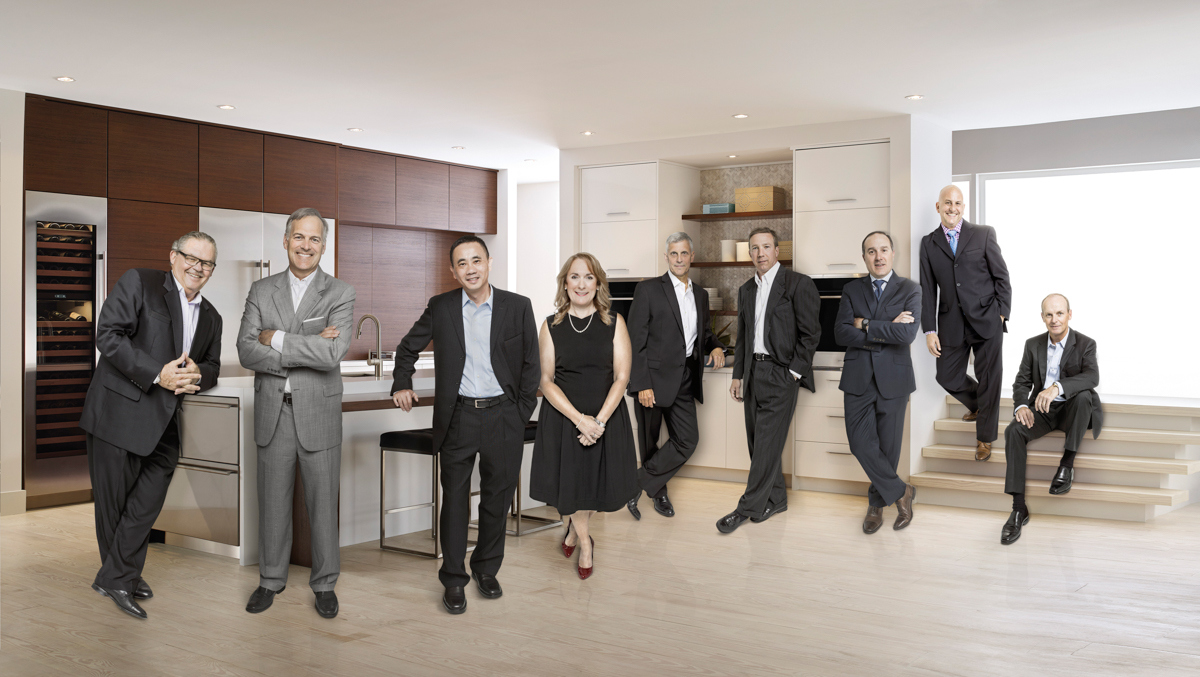 So that’s just about it… and we were even lucky enough to have a nice little BTS video made by our wonderful intern at the time Jordan Reynolds. So please check that out below to see how it all came together.

PREVIOUSSharing Is Caring…
BACK TO BLOG